Dr Omane Boamah: A Victim Of Dedicated Service And Loyalty To John Mahama And Ndc 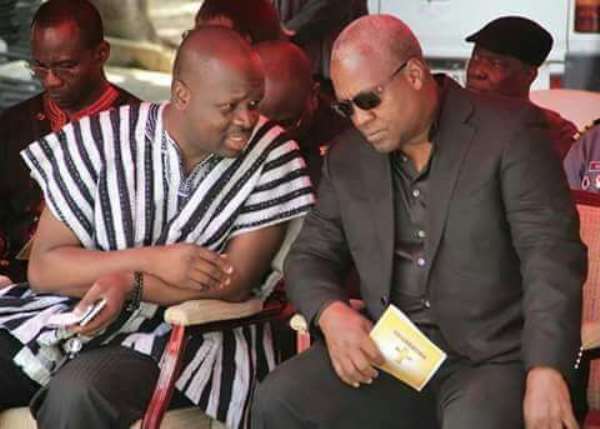 The 40th President of the United States, President Reagan, coined one of the most memorable quotes on loyalty in politics. Reagan coined the rule he called the Eleventh Commandment during his 1966 campaign for Governor of California. He said "Thou shalt not speak ill of any fellow Republican". Supporting the leadership of the party and also defending the decision taken party and by extension the government is a fundamental concept of good governance. The Bible talks about loyalty and it says " Remind the people to be subject to rulers and authorities, to be obedient, to be ready to do whatever is good".

Our Muslim brother and sisters also believe that loyalty is one of the highest virtues found among those who sincerely believe in Allah. Loyalty is a wonderful human quality and a necessary political one. Loyalty is an important component in the game of politics. Not only do you need loyal supporters, but you also need loyal aides to keep your office thriving into the future. On more personal level, loyalty stands for commitment and dedication to another allowing respect and trust to flourish. A loyal leader earns loyalty from his lieutenants by living the principles that acknowledge their worth and limitless potential. You cannot discuss loyalty without mentioning hard work, dedication to duty and honesty.

The Mahama administration was made up of hardworking and honest people and in their four years, transformed Ghana and changed lives. But one person who has become a victim of his dedicated service and loyalty to John Mahama is Dr Omane Boamah. Hard work and dedication are just two of the main ingredients for the dish called success but they can complete a good meal. The young man is a positive thinker, who has a strong faith in himself and has a high sense of responsibility . Omane Boamah was and still remains of the loyal, hardworking, and honest persons around John Mahama. His devotion or sentiment of attachment to his boss and willingness, in cooperation with his colleagues to invest his intellectual and moral resources generously and wholeheartedly is amazing and it expresses itself in both thought and action. He is one person who deserves commendation instead of condemnation.

Backbiting, backstabbing, deep hatred for colleagues, power struggle etc have become part of our politics and the hardworking Omane Boamah has become a victim when it comes to the negatives enumerated. But will always speak his mind and state his opinion. He has shown that he has a thick skin for such negatives. Not all people love hearing the truth, and when you dish out a fresh dose of reality, some might be inclined to toss it right back in your face or even come after you.

He is trusted by his boss John Mahama and his colleagues knowing they can count on him for true and objective advice. His boss trust him to tell him how it really is, without sugar coating the truth.

He was once the President of National Union of Ghana Students (NUGS) and unlike most NUGS presidents who align with the ruling parties, Omane Boamah gave the Kufour administration huge challenges and kept the administration on its toes throughout the period he occupied that position. He wrote a book "GETFund: A NUGS PRESIDENT'S ACCOUNT" which exposed the Kufour administration and Osafo Marfo as Finance Minister for managing the GETFund. He was constantly on radio speaking for Prof Mills and the NDC and ended up becoming one of the trusted comrades of the late Professor.

In 2008 election when the Npp was stealing the elections, he went on radio with his friend Samuel Okudzeto to incite the public against the thievery agenda by the Npp and its collaborators at the Electoral Commission. In 2008, he and his colleagues, traveled across the country at odd hours to sell the message of the NDC. They defied all the threats and clandestine moves by the Npp and boldly defended the NDC across the regions.

Unknown to many, some of the party's grassroots gained Maths and Science scholarships through his effort and some of them are doctors and engineers today. He is the calm and humble type. In 2012 when there were talks to make him the substantive campaign coordinator he rejected it and took steps to ensure the planned status quo remained. He is one of the pillars supporting the NDC in the Eastern Region and continue to sacrifice his time, energy and effort and does that passionately. He is a workaholic and innovative. He has managed to maintain his attraction after leaving office. You may criticise him for anything, but even his enemies would admit that he is extremely intelligent, selfless, hardworking and sharp and strategic thinker.

Your most important political alliance is your relationship with your boss. He actively manages his relationship with his boss culminating in the sweet relationship they enjoying. He continue to open his doors to the grassroots and has never hesitated to offer support to the hardworking comrades when they share their problems with him.

In spite of all the enumerated positives about the former communication minister, some characters who see him as a threat to their diabolic agenda (s) deliberately launch attacks on him. Some even attack him because their fetish priests have deceived them that he is eyeing the Vice Presidential candidate slot when the man has vehemently denied that propaganda and shown no interest. Others attack him because he protect his boss against diabolic activities by these selfish characters. He has his boss's back and will always protect him from the disloyal. He deserves our entire admiration and respect. Just as he is loyal, he is reliable and morally sound.

People who have never met this kindhearted man attack him based on what his enemies within tell them. Opening up to him, and deepening your relationship, you can know him better, and understand why he still enjoys massive love and support across in spite of all the attacks. He is affable, selfless, calm, humble, and extremely kind.

Hooray for loyal collaborators and comrades! Nothing compares to them.