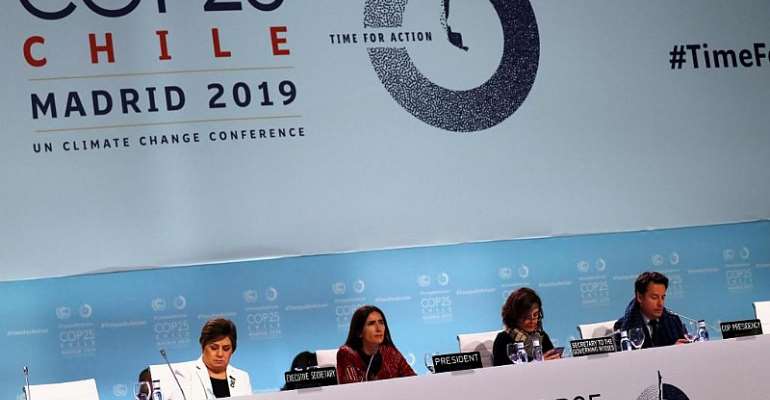 As the UN climate summit in Madrid limped toward a delayed conclusion on Saturday, a sense of anti-climax and disillusionment gripped environmental campaigners and activists, frustrated at the lack of progress.

Anger erupted at the UN talks in Madrid almost as soon as host Chile submitted its draft final text on Saturday, a day after the COP25 summit was meant to have ended.

Many campaigners said it was among the worst they had seen in many years of UN climate negotiations.

"What we have here in Madrid is a betrayal of people across the world," Adow told RFI, warning that the text risked reversing the gains of the landmark 2015 Paris climate deal.

The summit in the Spanish capital came on the heels of climate-related catastrophes including deadly storms, flooding and wildfires, as well as weekly strikes by millions of young people inspired by the teenage activist Greta Thunberg.

Lack of ambition
Yet despite the evidence, campaigners were outraged at the unwillingness of governments to show ambition commensurate with the gravity of the climate crisis.

"This text is completely unacceptable and it would be a betrayal of people around the world suffering from the impacts [of climate change] and those that are calling for action," commented Jennifer Morgan, executive director at Greenpeace International who has been attending climate summits for 25 years.

The COP25 summit was aimed at finalising the rulebook of the Paris agreement, which goes into effect next year. The deal enjoins nations to limit global temperature rises to "well below" two degrees Celsius.

Instead, delegates were exasperated at what they called backwards steps, nearly 24 hours after the two-week gathering had been set to close.

"The approach Chile has taken on this text shows how it has listened to the polluters and not to the people,” Morgan told RFI.

Disconnect
Meanwhile, veteran observers were stunned by what they called the disconnect between the overwhelming science on climate change and what countries are doing to address it.

"The latest version of the Paris Agreement has no call for countries to enhance the ambition of their emissions reduction commitments," Alden Meyer, strategy and policy director at the Union of Concerned Scientists, told AFP.

Disagreements have centred around how to create a global carbon trading market, an issue that derailed the last talks in Poland.

"The theory behind carbon markets is that certain countries would set lower emission reduction targets in exchange for funding emissions-reducing sustainable development programs in developing countries," explained Sebastien Treyer, the director of development and innovation at the Institute for Sustainable Development and International Relations.

Look my children in the eye
"One fundamental risk is double-counting, but it also discourages countries from setting more ambitious targets," he told RFI.

Asked what the COP25 talks had achieved, Treyer pointed to the EU's 'green deal' unveiled this week by the EU commission vice-president Frans Timmermans.

The deal is aimed at making the 28-member bloc carbon neutral by the middle of the century.

"Up until now it was developing countries that shouldered the burden of ambition, now the EU is taking a stand," he said.

However, old divisions between rich polluters and developing nations also stalled talks, with critics pointing the finger at the US for using the climate summit to try to ensure it will never have to pay for the damage climate change is doing to poorer nations.

The very existence of the Marshall Islands is threatened by the effects of climate change, from stronger storms to droughts and sea-level rise.

"We are here and we will fight and the world is watching and I need to go home and look my children in the eye with an outcome which will ensure their future and the future of all of our children," Tina Stege, the climate envoy for the Marshall Islands told delegates.