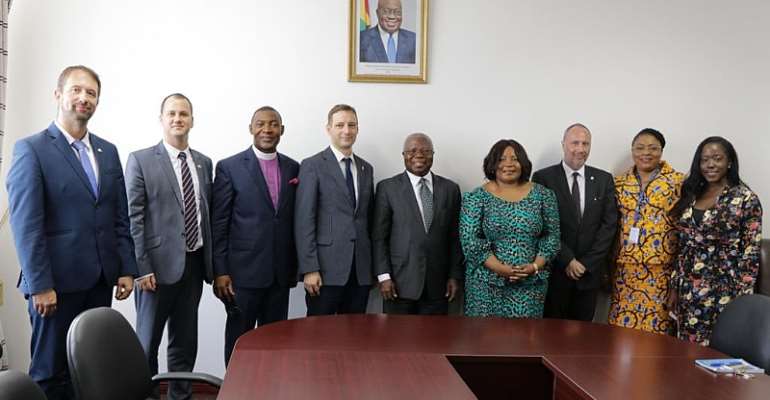 The Republic of Hungary has sought Ghana’s support for persecuted Christians.

Ahead of his day’s visit to Ghana on Monday, December 9, 2019, he made a stop-over to Burkina Faso.

While in Ghana, he met with Deputy Minister of Foreign Affairs and Regional Integration, Charles A. Owiredu.

On the same day, he held talks with members of the Ghana Catholic Bishops Conference, the Methodist Church of Ghana, as well as the Christian Council of Ghana.

He seized the opportunity to also visit the Don Bosco’s Children Village in Tema and attend a church service at Assemblies of God Church in Accra.

During their meeting, the Deputy Foreign Minister informed the Secretary of State that Ghana being a democratic and circular country, respects religious pluralism which has largely accounted for the peace and stability she currently enjoys.

He stated that Ghana is a free country and as such does not condone the persecution of people based on religion, race or creed and informed that freedom of religion is a fundamental human right guaranteed by the constitution of the Republic of Ghana.

In this regard, he informed the Hungarian official that Ghana will support any international law, convention and efforts that seek to rally support for people being persecuted based on their faith.

Meanwhile, he disclosed that the Parliament of Ghana has ratified the Agreement between Ghana and Hungary on Mutual Visa Exemption for holders of Diplomatic and Service Passports in November, 2019.

He indicated that the Ministry was waiting for an
official notification from Parliament in order to communicate the ratification to the Hungarian authorities and informed that Government was working on all other outstanding Agreements for Signature.

Ghana and Hungary have had long-standing bilateral relations which date back to the 1960s when the two countries established resident diplomatic missions in each other’s territory.

According to him, relations between the two countries been characterized by regular exchange of high level visits.

He underscored that the impending State visit to Ghana in January, 2020 byPresident Janos Ader of Hungary will further solidify and strengthen the bonds of friendship that exist between the two countries.

He seized the moment to commend the Government of Hungary for re-opening its Embassy in Ghana and indicated that the re-opening of the Embassy in Accra in April 2016 has contributed enormously to the strengthening of relations between Ghana and Hungary.

He also acknowledged the contributions made by Hungary to Ghana’s economic development particularly through financial assistance in the form of loans and express the hope that both countries would cooperate in the framework of the Tied Aid Credit Programme being offered by Hungary.