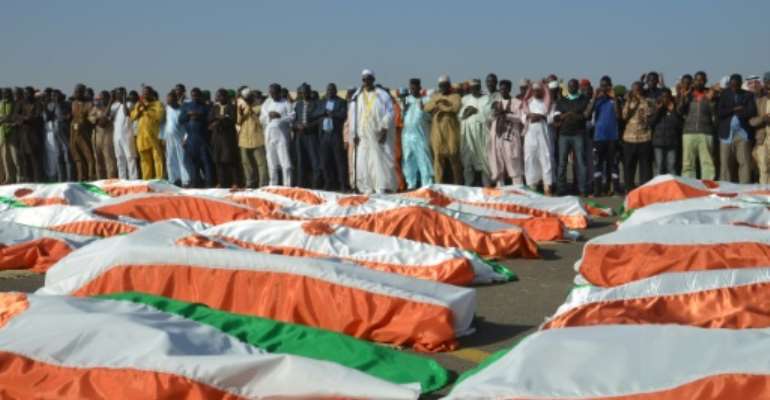 The summit announcement came a day after Niger's military buried its dead. By BOUREIMA HAMA (AFP)

G5 Sahel leaders will meet Sunday for an emergency summit in Niger to coordinate their response to a Jihadist attack on an army camp that killed 71 military personnel, Mali and Niger said

The Islamic State group claimed responsibility for the assault, in which hundreds of jihadists on Tuesday attacked the camp near the border with Mali with shells and mortars.

"Yesterday our neighbour Niger buried 71 of its soldiers who died by the bullets of those who want to spread chaos," Mali President Ibrahim Boubacar Keita told an audience in Bamako on Saturday.

"We will not fail in our solidarity with Niger and tomorrow my brothers of the G5 Sahel and I will go to Niamey and we will consult together," he said.

The Niger presidency confirmed the summit to AFP.

The attack in Inates in the western Tillaberi region was the deadliest on Niger's military since Islamist militant violence began to spill over from neighbouring Mali in 2015, and dealt a blow to efforts to roll back jihadism in the Sahel.

Nigerien President Mahamadou Issoufou raced back in the night from a security and development conference in Egypt to chair a meeting of the National Security Council in Niamey. Three days of national mourning were declared.

Militant violence has spread across the vast Sahel region, especially in Burkina Faso and Niger, after it began when armed Islamists revolted in northern Mali in 2012.

The talks will now take place early next year.