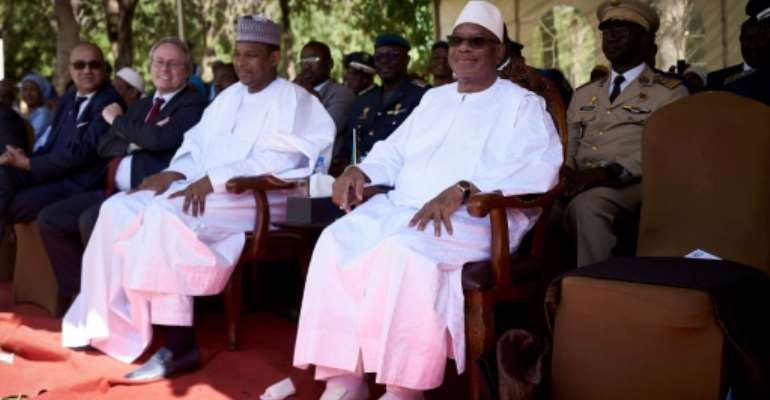 Swatting aside opposition scepticism, Malian President Ibrahim Boubacar Keita on Saturday received representatives of political and armed groups as well as civil society in an attempt to foster dialogue in his conflict-wracked country.

The talks are being advertised as a "national inclusive dialogue" and an opportunity after months of jihadist and ethnic violence with islamists having killed more than 140 Malian troops since September.

The violence -- part of a Sahel-wide insurgency which national armed forces, backed by 4,500 French troops, are struggling to contain -- comes alongside bloodshed between Fulani herders and sedentary farmers in the country's centre.

"Let us unite, let us join hands to plug the holes of a broken vessel," said Keita as he received some 3,000 delegates to Bamako's Palace of Culture.

Resolving a crisis which exists on many levels -- security, humanitarian but also economic with the added issue of climate change -- requires establishing a political roadmap.

The failure to date of imposing a military solution has encouraged a broad feeling that dialogue, including with the jihadists, is the only way to move forward.

The almost daily attacks by islamists and other armed groups in seven years of conflict only emphasise the scale of what appears an almost insuperable challenge facing Malian society -- but also the need for a solution.

Some strands of opinion have, however, preferred not to seize the hand Keita has extended, distrusting his motives.

Underscoring the problems of how to bring the country together was the absence of main opposition leader Soumaila Cisse, who refused to attend after Thursday slamming the talks as "pure political communication" and "contrived".

The Anw Ko Mali Drown platform which groups several parties and associations also declined to show, complaining of what it saw as a lack of inclusivity during months of preparations for the talks.

The government rejects that view, however.

"There were consultations in 605 out of 703 communes," organising committee chairman Cheick Sidi Diarra told AFP.

Despite the reticence of the likes of Cisse, the main Tuareg groups who signed an albeit still shaky 2015 peace accord in Algiers on receiving guarantees of inclusivity and decentralisation are attending the Bamako showdown.

The Coordination of Azawad Movements (CMA) alliance of rebel groups, the main armed group which signed the peace deal, is at the talks, saying it has received government assurances.

"We are here because we are certain nobody will touch the peace accord during this dialogue," CMA spokesman Almou Ag Mohamed told AFP.

Given the slowness in implementing the accord and the ongoing unrest in spite of it, some opposition groups have called for it to be unpicked -- something the signatories reject.

Keita angered some of the militias by opening the door to revising the 2015 accords which were meant to disarm rebel groups and integrate them into the national army but have not been implemented.

A 2017 proposal to revise the constitution and introduce more decentralisation has also been blocked, since Mali's opposition has not endorsed that project.

The nine days of talks are intended to function as a crucible for debate for alternative solutions as Mali seeks a way out of the mire.