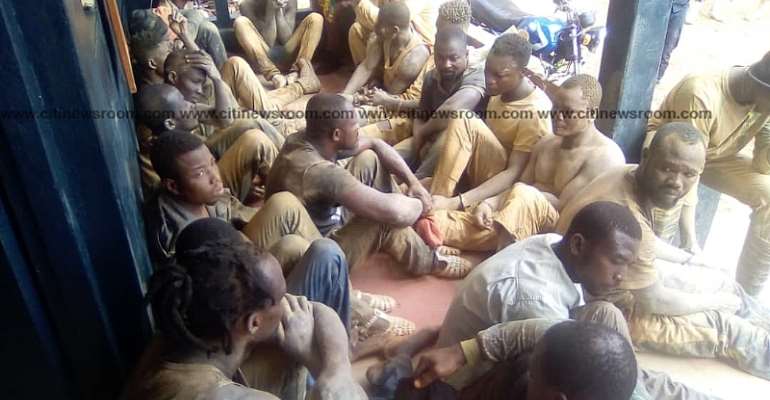 The miners include 60 men and two women.
Regional Police Commander, DCOP Kwaku Buodu Peprah who led the operation in a Citi News interview said the arrest follows a series of complaints from Newmont Ahafo mines.

“The operation is about galamsey activities at Newmont, so following complains from Newmont administration, we visited the place yesterday and we saw things by ourselves, so we decided to embark on an operation today, so around 4 am this morning, we moved to the galamsey site and we were able to arrest about 62 including two women.”

DCOP Kwaku Buodu Peprah said they will be arraigned on Monday.

Illegal mining known locally as galamsey,  has been a topical issue in the country for the past few years, sparking major campaigns and outrage by Ghanaians especially over the negative impact on the activities on water bodies and lands.

Citi FM led a campaign spanning many months with a petition to Parliament to demand among other things that the mining sector be sanitized.

Government, therefore, waged a war on small-scale illegal mining, in 2017 following pressure from the media.

All forms of small-scale mining were subsequently banned and a taskforce known as Operation Vanguard was also formed to fight the galamsey menace.

But there are fears some farmers and landowners in parts of the country have connived with foreigners   from Burkina Faso, Mali, Guinea, Niger to mine illegally.

The government, in taking action on the campaign constituted a joint police and military taskforce called Operation Vanguard, which was tasked to arrest and ensure prosecution of illegal small-scale miners in the country.

While some arrests were made, rumours are rife that the task force has been in the business of taking bribes and leaving out illegal-small scale miners, but the taskforce's commanders denied those claims insisting that the major problem with their work was the slow pace of prosecution and the lenient sanctions imposed on persons prosecuted.

The government has turned to the use of other different  measures   in its quest to end illegal mining in the country and sanitize the sector.

It announced that it had introduced a software known as ' Galamstop ' to monitor mining concessions and the owners of the small-scale mining companies.