Are Officials Of The Gomoa East District Assembly Aware Of The Negative Impacts Of Climate Change Across Africa, Koraaa, Anaaa? 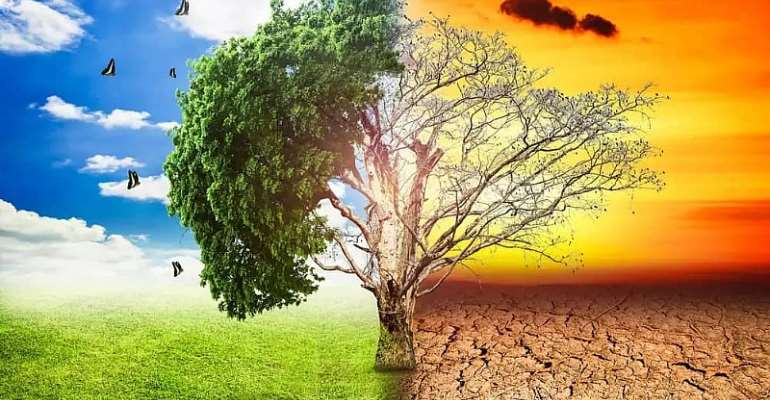 Yesterday, I sat on a much-loved old sofa on our front porch, watching all the branches of an innocent tree being cut, in amazement. It seems our very nice neighbours have forgotten that sometimes the winds accompanying heavy rainstorms in our area, are gale-force-strong. Hmmmm, eyeasem oooo.

With Africa now in the full grip of the negative impacts caused by extreme weather resulting from climate change, I await the next gale-force-winds in our area with trepidation.

And, since the many leaves of the now branchless massively-pruned-tree used to trap some of the dust that swirls around constantly, our home will need even more frequent dusting, now. And we won't even mention frequent respiratory illnesses from breathing in bigger volumes of dust-laden air. Heaven help us.

Heavily pruning trees by cutting down all their branches because snakes have been spotted on their branches (which seems to be the rather lame excuse my very nice neighbours have for denuding that tree of its branches), seems a tad cowardly, in one's humble view.

Whiles some districts with enlightened leadership are distributing tree seedlings for the greening of areas under their jurisdiction, other districts, such as our Gomoa East District Assembly, look on, as greedy individuals rumoured to be part of a local mafia, cut down all the branches of trees so as to chop them into pieces to sell as firewood - merely to put into their pockets.

Yet our area has some of the poorest, most disgusting-smelling and vile-polluted-air, in the entire world, today. Shame on the leadership of the Gomoa East District Assembly, who ought to sit up and work hard, if they are to improve their rather poor record in environmental stewardship. Hmmmm. Yooooo...