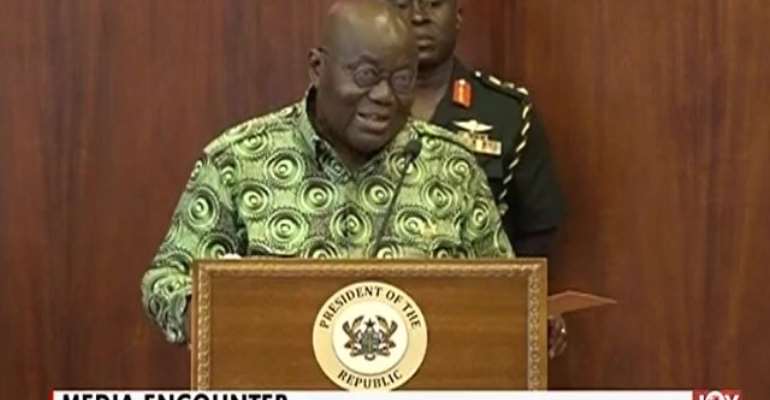 President Akufo-Addo has ridiculed the general assertion that corruption is still dominant among appointees of his government.

According to the president, no allegation of corruption against any member of his government has gone un-investigated, hence the accusation of him supervising a corrupt administration is false.

“I am not corrupt and I will never be corrupt. For these accusations that have been made against some of my appointees, none has been ignored. In fact, all have been investigated. For some people, the allegations are enough to convict people but I don’t believe that.

“Allegations are supposed to be investigated. It’s either they are investigated by the police or whatever other institution and at the same time in the court, but they have to be tried. In the process of trying people, people are entitled to make applications to test this or that and all of these things delay cases. But for me, it is a better system. The thing about due process is that, it is only when you are in trouble that you appreciate it.”

The Transparency International (TI) in January this year, ranked Ghana 78 out of 180 countries on the 2018 global Corruption Perception Index (CPI). According to the report, Ghana scored 41 out of a possible clean score of 100, with the score showing that Ghana’s performance had improved by one point from its 2017 score of 40.

While several factors including policies and initiatives by the governing New Patriotic Party (NPP) have been alleged to account for this improvement, some Ghanaians maintain government is losing the fight of corruption on the ground."

But addressing the media at the Jubilee House on Friday, President Akufo-Addo said while Ghanaians may be bothered about the slow pace with which corrupt acts are dealt with in the country, the fight is still ongoing.

According to him, it was not only members of his government who are being investigated over corrupt charges but members of the erstwhile administration.

“There are unfortunately twenty-five person involved in the last administration who are on trial for various acts of financial misappropriation, corruption etc who are on trial not about to be, but already on trial and the amounts of money involved collectively in those trials, a hundred and thirty million dollars and some two hundred and eighty seven million cedis, and when we put them together in today’s figures it’s over a billion cedis. So it’s not as if nothing is happening, when you read about it, you will know a process is being followed. We want to do it within the context of the process. For me, it is extremely important.”

The media encounter, the third since his assumption of power gave President Akufo-Addo the opportunity to answer questions from journalists in the areas of the economy, governance, health, education, security among others.