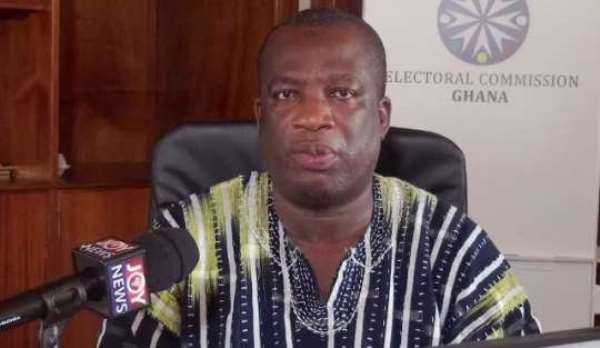 Director of Electoral Services at the Electoral Commission, (EC), Dr. Serebour Quaicoe says barring any unforeseen challenges delivering electoral materials to polling stations for Tuesday’s District Level election would be smooth, adding that electoral materials have already been dispatched to the regions.

He explained that electoral materials can only be sent to polling stations on election day, hence the need for officers to come out with plans that will ensure prompt and swift delivery of materials that day.

Dr. Quaicoe was speaking at a GJA /STAR-Ghana Sponsored Television programme, dubbed “we the People”, in Accra. This episode focused on a successful December 17, 2019 District Level election.

Dr. Quaicoe said unlike general election where the EC takes charge of all the processes, the Ministry of Local Government and Rural Development is in charge of organisation and planning of District Assembly elections.

He said the EC, on the other hand, takes care of the CIs for electoral areas to be updated, “including voter register, exhibition, and nomination”.

He said voters can select only one candidate for the assembly election with five for the unit committee.

”The ballots will be counted at collation centres within the electoral area”. Dr. Quaicoe explained”.

Adding that the simple pass the ballot will be used to declare winners, which means “candidates can win with a difference of one vote”.

In electoral areas where candidates vying as unit committee members are less than five the candidates stand unopposed.

Dr. Quaicoe said to cut down cost the EC provides a Common Platform where candidates collaborate with the Deputy Returning Officers in Charge of Special Duties to come up with a plan suitable to the electoral area to make their vision known to residents.

He asked candidates to take advantage of this initiative to market themselves.

Touching on how electorates can know candidates vying for positions, Dr. Quaicoe said notices of polls have been pasted at visible areas within the electoral areas and asked the electorate to look out for them. Dr. Quaicoe reiterated the Commission’s policy of giving preferential treatment to People Living with Disability, PWDs, by not joining queues at polling stations. He encouraged PWDs, to seek assistance from Presiding officers who have been mandated to give them help. On the creation of additional six regions and whether it would in any way affect work of the EC.

Dr. Quaicoe said: “creating of new regions would rather enhance the work of the Commission because there would be more hands to do the work”.

Adding that the pivotal role of assembly members and Unit Committee members to local development is of essence, Dr. Quaicoe asked the public to go out in their numbers to elect competent people to represent them at the districts.