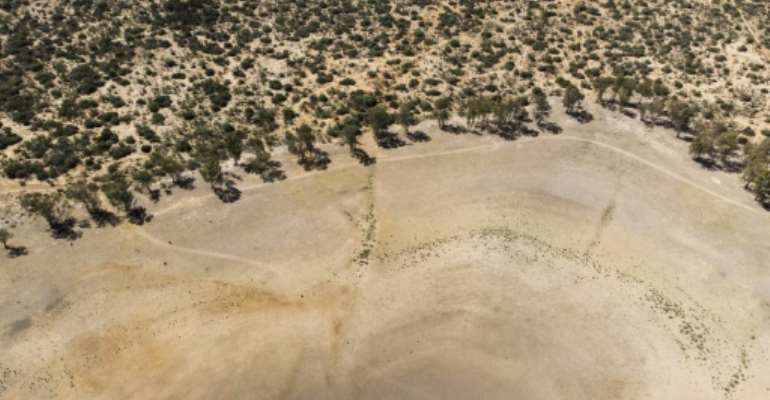 Dessicated: An aerial view of Adelaide Dam in Eastern Cape Province, gripped by a brutal drought. By Guillem Sartorio (AFP)

His excitement was short-lived. Just a few days later, the forecast changed. It was back to cloudless sunshine.

In South Africa's Eastern Cape province, no one can remember the last proper downpour. Some say it was five years ago, others six.

"This is a disaster," said Bothma, 51, who in his three decades working the land has never seen such dry weather.

"Older people who are 70 or 80 years old would tell you exactly the same thing," he added.

Southern Africa is grappling with one of the worst droughts in decades -- the outcome of years of absent or erratic rainfall, and temperatures that have reached record highs.

Millions are facing hunger due to poor harvests and dwindling livestock.

"It is usually beautifully green at this time of the year," said Bothma, as a hot gust of wind swept through his sheep pen.

"But now even the pine trees are dying."

South Africa is one of the world's driest countries at the best of times.

Rapid urbanisation and growing water consumption have placed a strain on water reserves and caused the coastal city of Cape Town to almost run dry in 2018.

But the ongoing drought has compounded the situation.

South Africa is in "a dire situation", said Ramaphosa in October, highlighting that five out of nine provinces were badly hit.

Bothma has had to cull around 60 percent of his merino sheep, including lambs. 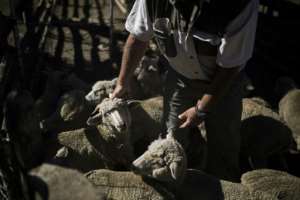 Farmer Steve Bothma separates male and female merino sheep -- the animals are being sold for slaughter because of the drought. By Guillem Sartorio (AFP)

Because of the drought, he could only afford to keep 2,000 as "breeding stock".

"Usually I keep them until they are five or six years old," Bothma explained, as his staff selected animals for the next trip to the slaughterhouse.

The price he gets for his merino wool has plunged by around 40 percent over the past year due to the drought and a foot-and-mouth disease outbreak in the north of the country.

"The wool is full of dust and not very strong," said Bothma.

Years of dry weather have left scars in the landscape. 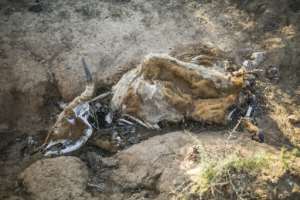 A carcass of a cow that died from starvation near Adelaide Dam. By Guillem Sartorio (AFP)

Arid fields flanked the windy gravel road leading to the nearest town of Adelaide, tucked at the bottom of a mountain range.

Cows chewed pieces of wood and sheep ambled in search of food.

In town, livestock roamed the streets and nibbled at scorched grass on the golf course.

The nearest dam dried up at the start of the year.

Some of Adelaide's 15,000 inhabitants had been without running water for seven months.

A South African aid group, Gift of the Givers, has been helping by delivering water to the area since April.

On a recent water mission, hundreds of people In the township of Bezuidenhoutville rushed up with an array of empty bottles, buckets, iceboxes and even paint cans.

"We are keeping it for food and drink," said Rodney Douglas, 59, pushing a wheelbarrow piled high with plastic jerrycans.

Assanda Sais, 38, complained that she could only spare enough water to bathe once a week and that her house was "smelling".

"We keep dirty water to flush," she explained. 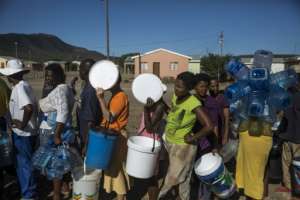 Bezuidenhoutville's local middle school has had to shorten its week by half a day due to the lack of water.

Many children were missing class altogether.

"Kids have to help parents to carry water," said teacher Zeenat Gangat, sweltering as the sun beat down on the container walls of a classroom.

"They can't wash," she added. "They complain about stomach issues."

Local authorities have tried to ease the situation by connecting sections of the town to a reservoir fed by Fish River, around 50 kilometres (30 miles) away.

The water is allocated on a rotational basis, but even then the pipeline to the river is way too narrow.

Adelaide deputy mayor Bornboy Ndyebi said the town's pipelines were in poor shape, and Thandekile Mnyimba, who heads the regional district of Amathole, told AFP that water trucks supplied by the government had broken down. 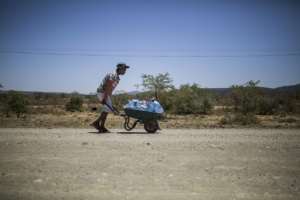 The hot way home: A young man pushes a wheelbarrow with bottles filled with water. By Guillem Sartorio (AFP)

"It is only when the dam reached a very low level - around four percent -- that they woke up," said DA councillor Ernie Lombard.

Ramaphosa has sought to pin the blame on years of poor governance under former president Jacob Zuma, whom he succeeded in 2018.

"Corruption in the water sector has in no small part contributed to the situation we currently face," he declared.

Close to 70 percent of the small town's inhabitants are out of work. When houses go up for sale, they stay on the market.

The manager of Adelaide's only hotel said she was worried if too many rooms were booked at the same time, as "it takes two weeks to do the washing". 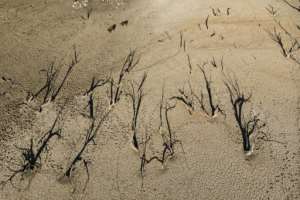 The dry lands: An aerial view of the dam floor. By Guillem Sartorio (AFP)

On nearby farms, high-yielding avocado trees now barely produce 10, low-grade fruit instead of 50.

Helpless farmers watch their animals succumb to thirst and hunger. Alton Snaer has lost nine of his 15 cows.

"I can't sleep at night," said the retired farmer.

Bothma feared that more months without rain would force him "to close the books".

"Farmers are taking their life," he said, eyes reddened by the dust.