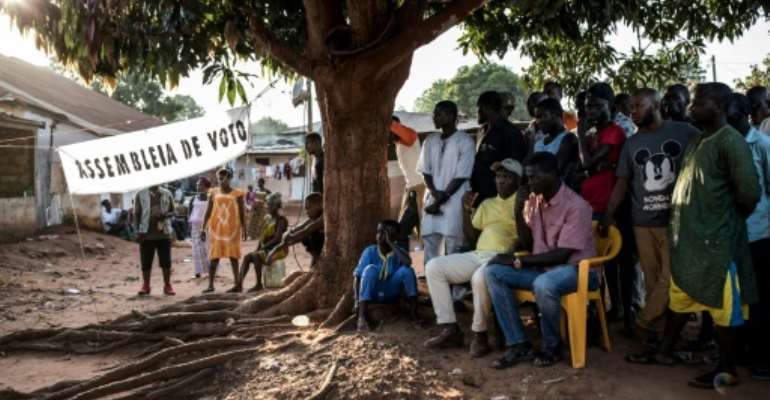 Officials count first-round votes at a polling station in the popular Bairro Militar area of Bissau in November 2019. By JOHN WESSELS (AFP/File)

Guinea-Bissau's two presidential finalists launched their campaigns Friday ahead of a runoff vote in the chronically-unstable West African state on December 29.

Voters are due to pick between Domingos Simoes Pereira, from the traditional ruling party, and opposition figure Umaro Sissoco Embalo, amid concerns about instability and a dire economy.

Due to last until December 27, the presidential campaign began with banners being hung on buildings in the capital Bissau and people sporting T-shirts with the image their favoured candidates.

He belongs to the African Party for the Independence of Guinea and Cape Verde (PAIGC), which has its roots in a movement that fought to end Portuguese rule in the country.

Pereira's victory in the second round is far from guaranteed, however.

Several opposition figures have rallied around Embalo, 47, who came second last month with 27.65 percent of the vote.

He represents Madem, an opposition party formed by PAIGC rebels.

While in office, outgoing president Jose Mario Vaz gridlocked the country by repeatedly clashing with parliament over his choice of government.

He is also the first Guinea-Bissau president in 25 years to finish his mandate without being ousted in a military coup.

Vaz -- who won 12.41 percent of votes in the first round -- has declared his support for Embalo.

So has opposition figure Nuno Gomes Nabiam, who scored 13.16 percent of the first-round votes, and Carlos Domingos Gomes, a former prime minister who won about two percent.

Speaking before hundreds of students in Bissau, Pereira said he was "capable of getting along with" Embalo and the ten other candidates knocked out in the first round.

Both Pereira and Embalo are former prime ministers.

Guinea-Bissau has seen multiple coup attempts since independence from Portugal in 1973, four of which have been successful.

Its chronic instability has made it a haven for Latin American drug runners, who use the country as a staging post for smuggling cocaine to Europe.