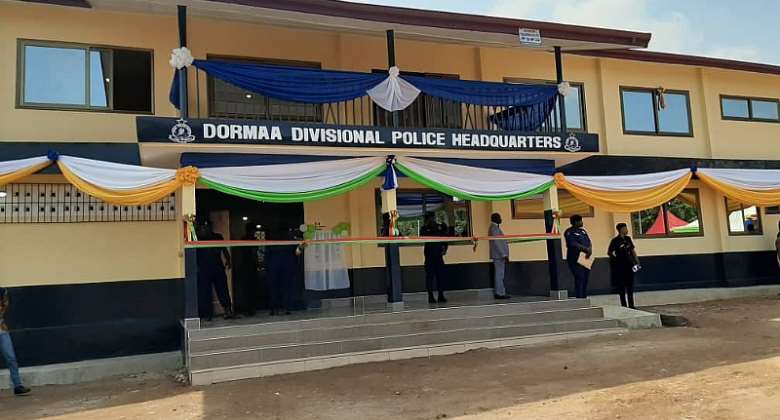 The Paramount Chief of the Dormaa Traditional Area in the Bono Region, Osagyefo Oseadeeyo Agyemang-Badu II, has constructed an ultramodern police station for the Ghana Police Service in his community.

He commissioned the Dormaa Divisional Police Headquarters - built with his personal resources - at a colorful ceremony held on Tuesday, December 10, 2019.

The benevolent gesture forms part of activities marking the 20th-anniversary celebration of the enstoolment of Osagyefo Oseadeeyo Agyemang-Badu II.

It is to help control the crime rate in Dormaa.
The police station bears testament to the fact that the Dormaahene cares about the welfare and safety of his subjects and is always willing to invest in their wellbeing.

It would be recalled that the Dormaa Traditional Council in the Bono Region on December 4, launched the 20th-anniversary celebration of the enstoolment of Osagyefo Oseadeeyo Agyemang-Badu II, and Odeneho Akosua Fima II, Queen of Dormaa.

The Council also launched the celebration of the 2019 “Kwafie festival” the most significant event on the traditional calendar, celebrated by the chiefs and people of Dormaa.