Why fighting 'franglais' is not just a war on words 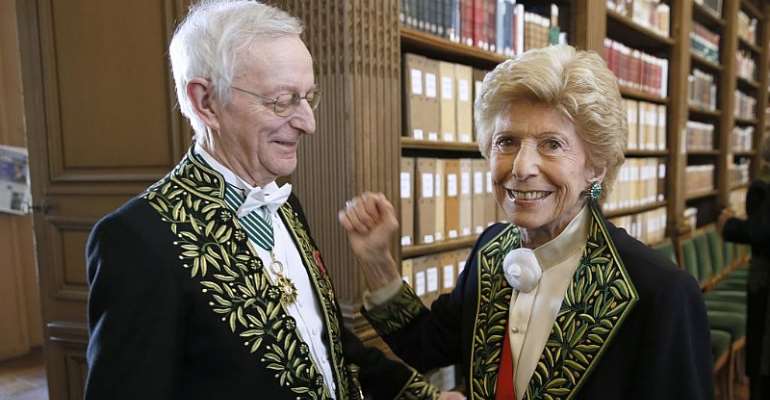 The Académie française, custodian of the French language, recently called out French officialdom for its overuse of “franglais”, warning it could endanger the language's very existence. This might appear a trifle dramatic in such a globalised world, but as a member of the Académie tells us there's much more than vocabulary at stake.

The Académie française has been admired and mocked in equal measure since it was founded in 1635 by Cardinal Richelieu. Its 40 members: eminent writers, thinkers, historians, doctors... are known as immortels. They meet every Thursday to ponder and discuss words: decide which new ones can enter the Academy's online dictionary and find alternatives to the army of franglais expressions like "une séance de brainstorming" or "j'attends ton feedback" which seem to be invading French but have not yet taken it over.

Immortel n°31 - the Franco-British writer and poet Michael Edwards - tells us about the Academy's raison d'être and strategy in battle.

This interview was produced for the Spotlight on France podcast and has been edited.

RFI: Why did Cardinal Richelieu found the Académie française back in 1635?

Michael Edwards: At the time the basic reason was that many French intellectuals thought that French could replace Latin as the intellectual universal language. It obviously didn't happen but that was what Richelieu hoped for. And for French to be able to replace Latin, it had to be perfected. The Academy thought the thing to do with French was actually to purify it, to remove all words which were not part of what we would now call intellectuals' vocabulary. This was absolutely right for the time.

It then became problematic. François Fenelon [theologian, poet and writer], a member of the Académie française, wrote a letter in 1714 in which he says: “for 100 years we've been purifying the French language and the result is we've impoverished it. Our job now is to enrich it”.

And curiously, considering English is now seen as the adversary of French, he says: “I am told that the English use all the words that are useful and take them where they can find them. And there's no reason why the French shouldn't do what the English do every day.

RFI: So the Academy's not about excluding foreign words from the French language?

ME: The Academy has never been in favour of excluding foreign words, except perhaps certain members, from time to time. The Academy acknowledges the fact that French is a mixture of many languages and we know now that a large number of words in French come from English but also from Arabic,Turkish, from various African languages.

RFI: Nonetheless this seeming overprotectiveness of the French language often gets the media coverage. The Academy issued a communiqué on 21 November warning state officials they were overusing franglais. A lot of people reacted to that on our Facebook page, saying France should get with the times and let the language evolve. What kind of words or expressions were you thinking of?

ME: We were thinking of all those expressions which have come into French over the last 60 years where an English word or expression is used basically unnecessarily. There's no animosity towards the use of English words where they are useful. For instance the words for north, east, south and west (nord, est, sud, ouest) come not only from English but from old English. As I jokingly say: without the English of the old Anglo-Saxons - from 5th to 11th century - the French wouldn't know in which direction to turn!

What we are worried about is the fact that English words now invade thick and fast. There seems to be no reason to re-baptise the Ecole de commerce de Dijon-Bourgogne - the Burgundy Business School. Or re-baptise Aeroport régionale de Lorraine - Lorraine Airport.

Even worse than that are what I call the furtive anglicisms which come in by stealth, like Sorbonne Université instead of Université de la Sorbonne. The problem is the order of the words is English.

The French seem to be over-willing to use English when in many cases one doesn't need it. And also the syntax of French, not only the vocabulary, is being wrenched.

RFI: So are you bothered about words like brainstorming, benchmarking and background and so on?

ME: We try to find French equivalents. The real problem is that one would have the impression looking at all these words, that every invention, every innovation in the modern world has been made by English-speakers - which is obviously not true. The French are highly inventive in all sorts of domains but they're less inventive in the domain of words. And I think if Fenelon were here he would say “why don't we continually invent before the English speakers do, then they would have the problem?”.

RFI: At the moment that's not really happening. Everything to do with tech and business tends to be in English now in France.

ME: Even the French president, who is the protector of the Academy, talks about France as the 'start up nation'. Well a French equivalent for 'start up' has been proposed which is jeune pousse. Who knows whether it will be successful or not but it's there. And if you must use the word 'start up' why not 'nation start up' which is the normal French word order.

RFI: On the Academy's website there's an interactive section called “dire, ne pas dire” (to say or not to say). One of the immortels came up with a French alternative for “coming out”. He suggested having your jour de courage (day of courage). Could that catch on?

ME: The problem is it's very difficult to invent a French word or expression at the moment when the English word has already become implanted because the French simply continue to use the English word. It seems to me that jour de courage is very good. But it's a bit French in the sense that it's somewhat abstract whereas 'coming out' speaks to you immediately. Jour de courage could be the moment when you sign on for the army!

The other problem is that English can work by placing words one after the other whereas French feels the need to relate words syntactically.

We've thought about the word 'smartphone' and we've come up with things like phone futé or phone connecté. Personally I prefer futé phone. It's true that it's the English word order but it makes you smile.

Still, I think that 'smartphone' will survive.
RFI: As an institution does the Académie française actually have any power over what government institutions, universities or public bodies can do with the French language?

ME: Officially, according to the original mandate as it were from Richelieu, according to the statutes of the Academy modified by Louis XVI and so on, we are the final instance for the French language. Officially if we say this is correct, it's correct. The problem is that the French are a rowdy lot, almost as rowdy as the English, and we cannot actually control how people talk.

As far as the government is concerned obviously they are the elected representatives of the people. All that we can do is to point out that the Loi Toubon exists and that it ought to be applied. It is the law.

RFI: The Loi Toubon is this 1994 law which insists French be used in all government publications, contracts and advertisements.

ME: Toubon introduced this law demanding that in all public circumstances in France one uses French. It seems to be perfectly reasonable.

RFI: But it hasn't been enforced?
ME: The law has been very little applied. People give lectures in English all over the place and so on.

And also there's a particular problem which is extraordinarily difficult to resolve. The constitutional council, France's highest court, has to comment on the laws and in the case of the Loi Toubon they said it didn't necessarily apply to publicity. This of course opened the gates to the publicity one sees all over the place in English.

RFI: France is a bit unique perhaps in wanting to protect its language in this way. Is there an equivalent of the Académie française in any other country?

ME: I think there are two reasons. One is not very flattering which is that the French are rather vexed that French didn't become the universal language whereas the Spaniards and the Arabs don't seem to mind that theirs didn't.

The deeper reason I think is that the French really do have a great love of their language. And they are aware that the way in which a people speak their native language influences all that they are and all that they think. In other words if the French began to use so much English that they were beginning to think in English, this would be dangerous to the specificity of their way of thinking. In all sorts of domains.

RFI: What are you thinking of when you say the French language is a reflection of the way they think, what is this French specificity?

ME: You can see the difference in the use of very simple daily expressions. For instance the French talk about un concours hippique, the English say a horse show. The French haven't got the word horse except in the word hippique. But you need to know Greek to know that hippos in Greek means a horse.

I think from the French point of view there is reality but language is there to enable us to see reality as a whole and elevate ourselves slightly above it so that we can comprehend but also judge and change and so on. The English, on the other hand, prefer to live in time, to move through the circumstances of time and space and so on. It's deductive rather than inductive.

RFI: French is more inductive?
ME: You can see the same difference in the French garden and the English garden. For me the real difference is that an English landscape gardener wishes to improve nature but according to the reality of nature itself. Hence the different levels, the winding lines, the fact that a wood looks like a wood and not like a park with trees aligned.

The French garden with its straight lines and perspectives - and I'm simplifying horribly here - is the manifestation of the superiority of the mind over the real.

It's important that the French keep this particular way of seeing things.

RFI: So how relevant is the Académie française in 2019?

And the usefulness of the Académie is that it may, at one and the same time, steer usage towards a real French spiritedness use of the French language, and enrich it usefully by whatever comes to hand, not only in English but words coming from elsewhere.