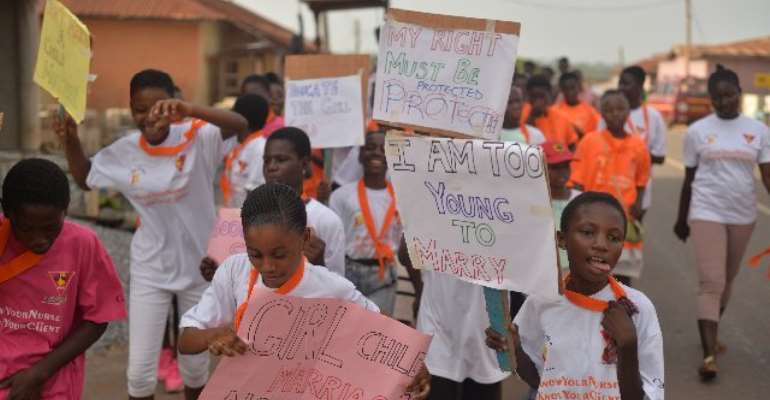 The Planned Parenthood Association of Ghana’s Young and Wise is taking the fight against Sexual and Gender-based violence to rural communities.

The all-female club took its campaign to Promoase in the Kumasi Metropolitan Assembly, with a procession and other public education activities.

It saw placard-bearing girls and young women from various communities join members on a route march to send their messages across.

“I’m too young to marry” and “My right must be protected” are some of the inscriptions displayed.

It is an avenue the club is using to achieve this goal as it seeks to empower members and sensitise the public on ending the phenomenon.

“As time goes on some will graduate and some are been recruited . This builds positive peer influence to serve as agents of change is also part of objectives. We want to educate them so they don’t fall prey to unscrupulous men,” noted Collins Fosu Frimpong, Head of facility, PPAG-Kumasi.

Reproductive health and livelihood empowerment issues were discussed during the community activity.

“The community has been educated and we hope they will support them in this fight,” Said Anthony Kwabena Sarfo project officer, UNFPA Girls empowerment project.

Members are optimistic the training has boosted their confidence to aspire for greater heights.

“I’ve learnt that if a friend reports of abuse at home, I have the right to report the matter to the social welfare,” said Comfort Andoh.

“If I’m been sexually harassed I can report the matter to the police to curtail the worst from happening,” said Elizabeth Adu.

The project is funded by the government of Canada and UNFPA.