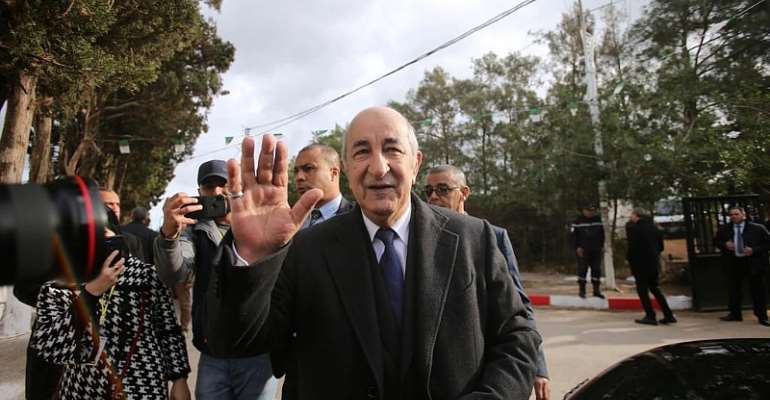 Algeria's former Prime Minister Abdelmadjid Tebboune was elected as the country's new president with 58.15 percent of votes. Following his win, the same protesters that took to the streets to oust former president Abdelaziz Bouteflika are out in full force against the former PM.

In a press conference in Algiers on Friday, the country's election authority confirmed Tebboune's win with 4.9 million of the counted votes, ahead of Islamist candidate Abdelkader Bengrina, with some 1.4 million votes.

Authorities had hoped these elections would see an end to the 42 week movement that kept the country politically unstable.

But to the masses out on Friday, 74 year-old Tebboune is just an extension of Bouteflika.

Tebboune served as housing minister under Bouteflika and briefly as prime minster.

He and the other four candidates whom he ran against in Thursday's polls all have direct or indirect connections to Bouteflika, making all of them unacceptable choices to protesters.

Boycotted vote
When polls opened on Thursday, nearly 10,000 protesters hit the streets to mark their disapproval of the elections.

Many areas were void of voters following a mass call to boycott by the opposition Hirak movement Hirak and other splinter groups.

The electoral authority said overall turnout was about 20 percent, making it quite low.

In Kabylie, the region in the north of the country, normally at odds with Algiers, most people didn't vote at all.

By the afternoon, Tamara, a freelance journalist who asked that we not give her full name for security reasons based in the area, told RFI “all of them are a no vote -  everybody.”

One of the few areas that did see voters casting their ballot was in the south said Tamara.

“In some of the poor areas, particularly in the south in Tamanrasset, there's been voting there. It's a lot of poor, poverty stricken areas, and they're cut off from the rest of what's going on in Algeria,” she added.

Hirak and the movement
When the main opposition movement, called Hirak formed some 42 weeks ago, it was peaceful. And there were no clashes between them and authorities.

They have been demanding from the start that the government bring into power a new generation that has nothing to do with the ruling elite and its connections to Bouteflika's regime.

In 2001, one of the five candidates, Ali Benflis, while Prime Minister under Bouteflika, issued a ban on all protests; a ban hold today.

The fact that protests had been allowed for many weeks and without problems was remarkable. But after the announcement of Thursday's elections, protesters started to be targeted by authorities.

“We saw during the campaign trails, how masses of protesters were actually arrested simply [by] just protesting their presence,” notes Yasmina Allouche, an Algeria researcher.

“And none of these candidates said anything against,” stresses Allouche.

During voting on Thursday, protesters clashed with police who tried to break them up.

Military might
Since the days of independence from the French in 1962, the military has had a very big and present role, particularly after Bouteflika came to power.

Unlike the olive branch offered in Sudan by its military rulers to create a civilan rule, Algeria's military continues to wield that power.

“The military has always been the true power holder of the Algerian system. They have always used a civilian façade. They've used Bouteflika for 20 years. They've used multiple presidents before him, but the real power lays within the hands of the army,” Zine Labidine Ghebouli a political analyst with the Washington Institute for Near East Policy told RFI.

“So right now the Army's looking to appoint somebody….no matter who it is, just as tough as a new civilian facade, they're trying to renew the civilian facade of the system because they are facing an increasing pressure; they are [nearing] a direct confrontation with the people,” adds Ghebouli.