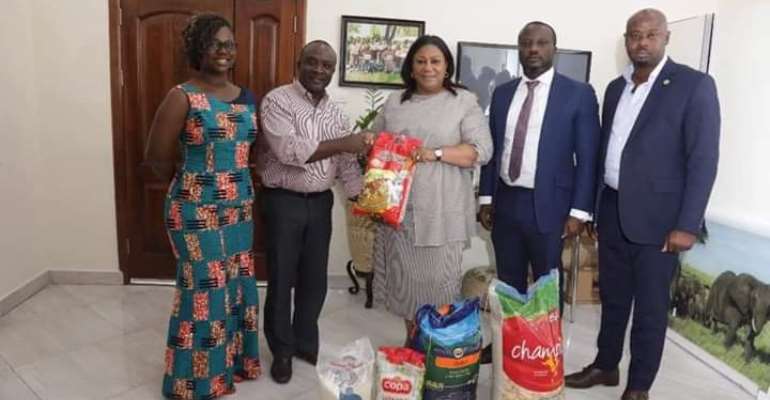 The First Lady, third from left in a group photo with members of the Ghana Inter- Rice Professional Body

First Lady , Mrs Rebecca Akufo-Addo yesterday met with executives of the Ghana Rice Inter-professional body at her Office in Accra.

Accompanied by officers of the JAK Foundation, the visit was for the Association to appeal to the First Lady to join them in the campaign to patronise made in Ghana rice.

They said government’s initiatives in the agricultural sector including rice production were yielding results thus the need for the body to embark on a campaign to ensure that their produce is consumed.

The First Lady congratulated them on their initiative and assured them of her unflinching support.

She said government’s Planting for Food and Jobs policy had led to significant increase in foodstuff on the market and so the need to develop creative ways to ensure that they are patronised to ensure their continuous production.

Apart from the opportunity to create more jobs through its consumption, Mrs. Akufo-Addo also emphasised on the nutritional properties of locally produced rice which promotes good health.

She promised to support the campaign to consume locally grown rice by ensuring that all rice components of her Office’s donations or domestic consumptions are locally produced.

President of the Ghana Rice Inter-professional body , Nana Adjei Ayeh II on behalf of members expressed their appreciation to the First Lady for showing readiness to assist them in their cause stating that with high profile Ghanaians as The First Lady on their side, they were positive of making significant in-roads in the campaign to consume Ghana rice, by end of the year.

He said farming under the current government had witnessed significant improvement with many tertiary graduates now turning to agriculture as a means of livelihood, instead of white-collar jobs.

Policy Advisor of the JAK Foundation, Nana Ama Oppong-Duah said past rice import bills which run into hundreds of millions of dollars has highlighted the need to consume locally produced rice to safeguard the value of our local currency from foreign assault and use the opportunity to create wealth for local farmers.

She said the JAK Foundation is working closely with the Ghana Rice Producers Association to ensure that the campaign to consume locally produced rice is sustained to become a nationwide success.

The delegation later presented bags of various brands of Ghana rice to the First Lady.