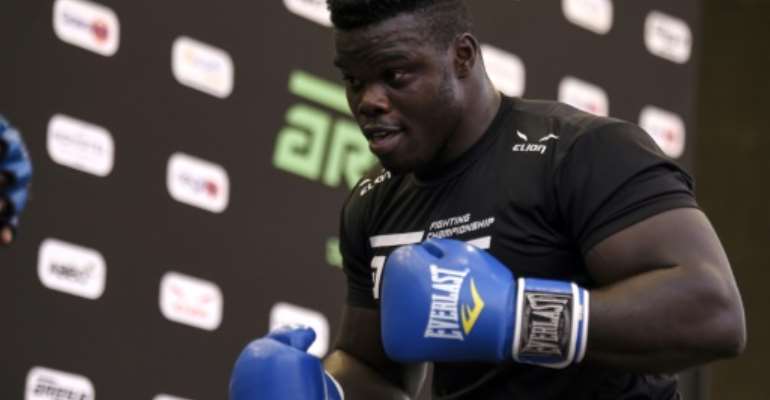 Reug Reug is a superstar of Senegalese wrestling who is hoping to make the transition to the highly lucrative world of MMA. By SEYLLOU (AFP)

Reug Reug, a superstar of traditional Senegalese wrestling whose biceps bulge under his green vest, was overflowing with confidence ahead of his mixed martial arts (MMA) debut on Saturday.

"You're going to last one minute," the 27-year-old told his opponent, deadpan, at a pre-fight press conference this week.

The traditional wrestler, whose real name is Oumar Kane, is one of a number in Senegal looking to test their mettle in professional MMA fighting cages, a sport whose top bouts are watched by TV audiences of millions.

A multi-billion dollar industry worldwide, MMA is an ultra-violent combat sport that mixes the punching skills of boxing with the grappling skills of Brazilian jiu-jitsu.

Traditional Senegalese wrestling also mixes grappling and sparring, and is one of the country's most popular sports.

Its fighters' skills are catching the attention of international MMA promoters.

On Saturday, a new MMA promotion company named Ares Fighting Championship, set up by industry veterans, is staging a series of fights in Senegal's capital Dakar.

The fight card includes first-timers such as Reug Reug as well as seasoned professionals.

The aim, organisers say, is to develop the sport on the African continent -- and to sniff out the next big-money stars.

"There's a lot of potential in Africa," Fernand Lopez, one of the organisers, told AFP.

He added that Senegal's native wrestling tradition attracted him to the country in the first place. 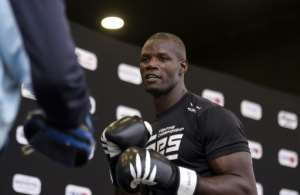 Ghislain Brick, a French MMA scout, said Senegal is an untapped talent pool. He is currently in talks to sign several fighters.

"You only need to look at the beach at night," he said, referring to wrestlers who train on the Dakar shoreline.

Kings of the arena

One of the sport's biggest stars, Francis Ngannou -- who has Lopez as his coach -- grew up in western Cameroon.

He is the number two ranked heavyweight in the Ultimate Fighting Championship, the world's largest MMA promotion company.

Other African fighters, such as Nigeria's Israel Adesanya, are also making waves.

"Senegal has the capacity to have real champions," said Lea Buet, a French judoka who has organised MMA fights for Senegalese wrestlers.

Wrestling, a centuries-old tradition, is a major spectator sport in Senegal.

Hulking fighters dressed in loincloths face off in packed stadiums, performing mystic rituals in the sand before going toe-to-toe.

Champions can win the equivalent of hundreds of thousands of euros -- a considerable sum in a country where about 40 percent of people live in poverty, according to the World Bank.

However, the earnings from MMA are in a different financial dimension -- the best fighters can earn many millions of dollars.

"It's an enormous sum of money," said Brick.

Some top Senegalese wrestlers are already moving over to MMA, stoking fears that wrestling's popularity will wane.

Senegalese wrestler Bombardier -- who has won the prestigious "King of the Arena" wrestling championship -- has already had a professional MMA fight, for example.

Lopez said he hoped MMA would actually have the effect of "bringing jobs and public attention to wrestling".

They are drawn in by successful African fighters, he said.

Gasmire Diatta, 28, is part of this new generation.

Better known as Kayilla -- which means 'champion' in his native Jola language -- he has wrestled since he was five years old but switched to MMA a year ago.

Diatta, a real-estate agent by day, added that international scouts have already approached him.

"I see myself as being a champion in two or three years," he said.

Of the 12 bouts that will take place on Saturday, two include Senegalese fighters.

And in a first of its kind for the country, the event will be broadcast on the world's largest MMA streaming platform.