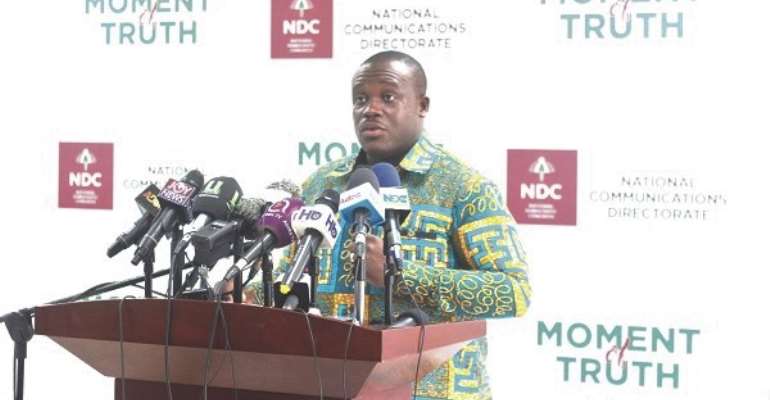 The National Democratic Congress (NDC) has called on the government to immediately withdraw the 50 per cent increase on the Communication Service Tax (CST).

It said the tariff increase had disadvantaged Ghanaians and worsened the plight of the ordinary citizens in the country.

At the party’s seventh “Moment of Truth” series in Accra yesterday, the NDC Member of Parliament for Ningo-Prampram, Mr Samuel Nartey George, said since the government imposed 50 per cent increase in the CST, the plight of Ghanaians had doubled, making the livelihood of people more difficult.

“You may recall the recent 50 per cent increase in the CST, which heralded this hardship and chaos, was originally introduced as a six per cent tax 11 years ago in 2008 by the John Agyekum Kufuor administration.”

“The six per cent tax was imposed on all voice and data transaction in the country. Despite being a consumer tax, Mobile Network Operators have managed it without generating the chaos that we have witnessed under President Akufo Addo,” Mr George said.

He accused President Nana Addo Dankwa Akufo-Addo and the Minister of Communications, Mrs Ursula Owusu Ekuful, of deliberately putting “needless hardship on Ghanaians using the telecommunication companies that do not even care about the consumer”.

Mr George said if the government failed to withdraw the 50 per cent increase on the CST, the next NDC government would review it immediately.

“This past week saw the culmination of frustration by Ghanaians. The frustration manifested as the online “SaveOurData” campaign which spread like wildfire in the harmattan,” he said.

Although the CST had been in existence for about 11 years, he said the “Nana Addo-led administration decided, simply, without recourse to consumers and current market indicators, to increase the CST by 50 per cent.

Touching on the common monitoring platform, he said the current administration had connived with its partners to award a US$180 million contract to KelniGVG for the next 10 years.

The amount, Mr George said, could be used to undertake a number of development projects but “President Akufo-Addo has decided to give it to a company that has no business undertaking such services”.

“It can also build seven more brand new district hospitals like the spectacular Dodowa Hospital at a cost of US$25 million each,” he added.

Mr George, therefore, demanded for a forensic audit into the KelniGVG contract and its operations so far to justify the money paid to them.