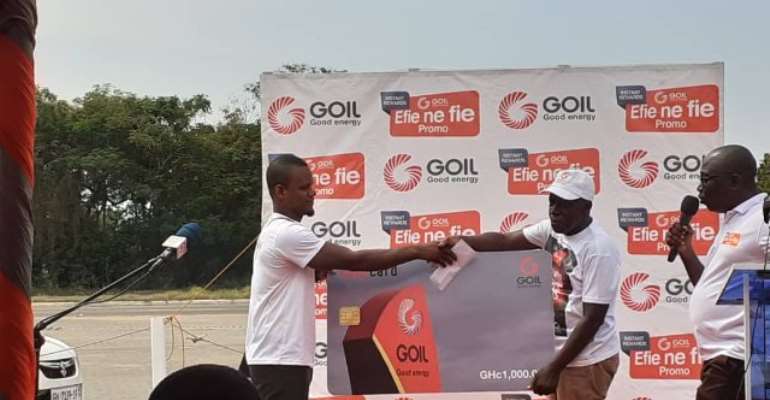 Some 920 loyal customers of Goil Ghana have been rewarded as the first batch winners of the Goil 'Efie Ne Fie' promotion.

The 920 who accrued the highest points in the promotion walked home with rewards of free fuel vouchers worth GH¢1,000, GH¢500 and GH¢300.

Speaking to JoyBusiness, Managing Director of Goil Ghana, Kwame Osei Prempeh explained that the gifts to the customers were to reward their loyalty for their dedication to the brand.

“We have the simple task of bringing smiles to our valued and loyal customers. At Goil, when we promise, we deliver. So as promised last month at the beginning of our national promotion, we are rewarding our customers in the first Ultimate awards of the ongoing Efie ne fie promotion”.

The 2019 edition of the promotion which has been ongoing since 2016, was launched in November. This edition is expected to end in January 2020 with 2000 winners winning various prices.

To be a part of the promotion customers must purchase fuel worth GH¢100 or more, to be given a scratch card to reveal a pin. They then text the pin to the short code, *161*4645# which allows them to accrue points, which qualifies them to win rewards. The more points accrued, the better your chance of winning.

The 920 loyal customers were selected from across the country, amongst which are drivers of private and commercial vehicles. 60 were rewarded with 1,000 worth of fuel, 300 won GH¢500 worth fuel and 560 won GH¢300 worth fuel. Aside the free fuel vouchers, Goil will also giveaway eight hundred thousand items to be given out as instant rewards throughout the period of promotion.