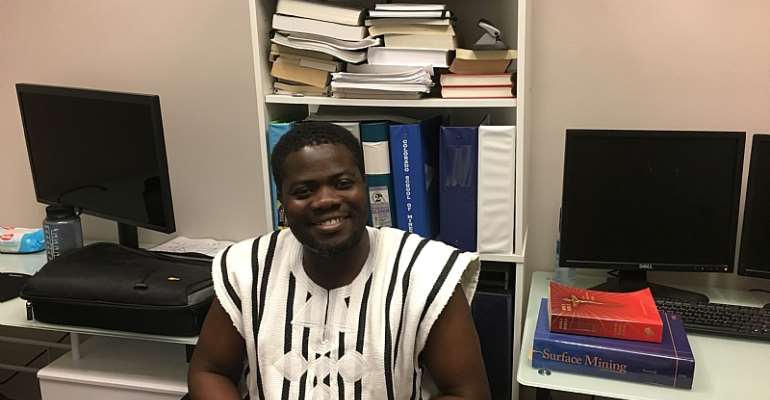 I write to inform all media houses to ignore the groundless, immature and erroneous publication from the entire leadership of NPP-USA, concerning Solomon Owusu’s opinion on President Akufo Addo’s gross incompetence. The infantile statement was published by the communications directorate of NPP-USA led by the bootlicking and irresponsible Josephine Agyekum-Wallace, who was appointed by the clueless, underperforming and valueless chairperson, Obaa Yaa Frimpong.

The statement was issued to counter Solomon Owusu’s opinion that President Akufo Addo does not deserve another 4-year term after failing Ghanaians on his promises with regards to corruption fight, “galamsey” issues, job creation and security matters. It was stated in their baseless publication that Solomon joined the California chapter for just one year and he was not a member in good standing as of July 2016. These are blatant lies which should be treated with a pinch of salt by all and sundry. The immediate past California Deputy Secretary was an active member for 4 years and he was the 14th person among the 311 members who had qualified to be on the NPP-USA voter register list in 2018.

Solomon is a mining engineer and he has been an NPP member from Obuasi since 1993. In USA, he joined the NPP–California chapter in 2012 after moving to the states in 2011. He resigned from the diaspora chapter in July 2018 after series of disagreements with the NPP-USA executives in terms of a planned fraudulent online voting issues, dishonesty and untruthful letters issued by the current immature and incompetent leadership to discredit certain credible members to some government officials at the Jubilee House and also the party’s headquarters in Accra.

On the backbiting matters, the current NPP-USA executives wrote a strong letter to the party’s headquarters to harm the good reputation of Richard Ahiagbah, a member from NPP-USA who contested John Boadu for the General Secretary position during the party’s elections in 2018. Solomon from California Chapter and Patrick, the former Chicago Chairman who had known Ahiagbah as a competent and credible person disagreed with the NPP-USA executives and stood behind him. Again, some elements in the NPP-USA discredited Solomon Owusu to some officials at the Jubilee House.

The two former executives from USA campaigned vigorously for Richard and supported the candidate financially, although not much. In spite of the fact that he could not win the election, he performed laudably to the surprise of everyone in the country with his 23% votes, which became a topic for discussion in Ghana. After the elections, Solomon further led Richard to different Radio and TV stations in Ghana to grant interviews, purposely to expose him to the public. Ahiagbah is now an indefatigable communicator for the NPP party and the current Executive Director of Danquah Institute.

Concerning the unacceptable online voting which was calculated to retain certain underperforming officers, Solomon dragged the whole NPP-USA branch to the Jefferson County Court in Colorado to place interlocutory injunction on the branch’s 2018 national executives’ elections. Again, he attempted to sue the branch’s former executives for alleged financial malfeasance and also invite the US Internal Revenue Service to investigate the organization’s alleged tax evasion. Through the intervention of certain respectable NPP bigwigs from Ghana, Solomon withdrew the case from court and stopped all possible lawsuits.

He was appointed as the Chapter’s Deputy Secretary in 2014, after his active role he played in his recruitment drive which drew Ghanaians from different states to join the chapter. Although he was living in Arizona, he joined the closest California chapter because there was no NPP chapter in his state. He used to fly or drive long hours to attend meetings in Los Angeles, California. He paid all his dues and participated in most fundraising activities. He donated two big bags full of clothes to be shipped to some of the adopted constituencies in Ghana for distributions to their members.

The gentleman is socially and professionally connected to lots of Ghanaians in USA and he used that opportunity to convince over 40 people from different states, including Arizona, New Mexico, Nevada, Idaho, Utah, Oregon and Washington Seattle to join the NPP-California chapter. The chapter became vibrant after being spiritless for a long time. King Solo, as he is affectionately called, had been a member of good standing during his years of service in the NPP-USA until his resignation. He has all documents and photos ready to prove to the world about his active involvement in the party abroad.

The fearless and outspoken immediate past NPP-California executive attended various NPP conferences and fundraising events in the United States during the 2015/2016 campaign period. He was hosting political shows on Amenado Radio in Denver, Colorado and campaigned vigorously for Nana Akufo Addo, especially on issues concerning “galamsey”, corruption, job creation, justice and local currency depreciation. He worked really hard for the party in the diaspora with the hope that Nana Akufo Addo would change the face of the country within 18 months as he promised.

In Ghana, he was a member of the Obuasi West Constituency where he used to make financial and logistics donations to them. In 2011, Solomon donated about 30 bags of cement to the combined Obuasi constituency when the party’s office in Brahabebome was under construction. The diehard former NPP diaspora executive had been in touch with his constituency in Ghana since he moved to USA to pursue further studies and work. Akufo Addo’s gross incompetence and “Mugabe rule” infuriated Solomon.

After the party won the elections, the firebrand became disappointed in President Akufo Addo on matters relating to the wasteful Ghana @ 60 celebration, corruption fight, Chinese nationals’ takeover of small-scale mining from the authorized Ghanaian licensed miners, unnecessary and needless national cathedral construction and insecurity issues under the watch of the President whom he campaigned for. Solomon vowed not to be misled by anyone because he stood for the interest of the current and future generations as far as truth, transparency and justice are concerned.

Solomon resigned from the entire NPP family in October 2019, after he was disallowed to enter an event at Rutgers University in New Jersey, USA to question President Akufo Addo on Menzgold brouhaha and the alarming rate of corruption in his government. He had previously “punched” the president with questions at the Princeton University in New Jersey, concerning Aisha Huang’s unlawful deportation after her arrest on illegal mining in Ghana and the president conceded that it was a mistake. Meanwhile, Ghanaians had been thrown to jail on similar offence which the president was aware of. Solomon’s argument was that the Ghanaians could also be pardoned and released from jail.

Also, he asked the president a question on how approximately 2 million ounces of small-scale mining gold, worth about US$ 2.6 billion could be exported from Ghana in 2018, according to Bloomberg’s report on 2018 gold export from Africa, when there was a ban on all small-scale mining operations from March 2017 to December 2018. He attended the second event with documents, videos and audio recordings as evidence to prove to the president that some of his appointees were involved in “galamsey” activities in Ghana, instead of addressing the menace as expected from his government.

After realizing that President Akufo Addo is aware of the corrupt practices by some of his appointees and his unwillingness to address the canker, Solomon decided to quit the NPP party. The patriotic and no-nonsense gentleman has decided to put the president and his appointees on their toes, irrespective of threats and intimidations. He is mobilizing the Ghanaian youth, both home and abroad to support any of the presidential candidates who will be willing to listen to the youth and consider the interests of the masses after winning the 2020 presidential election. God bless our homeland Ghana and make our nation great and strong!