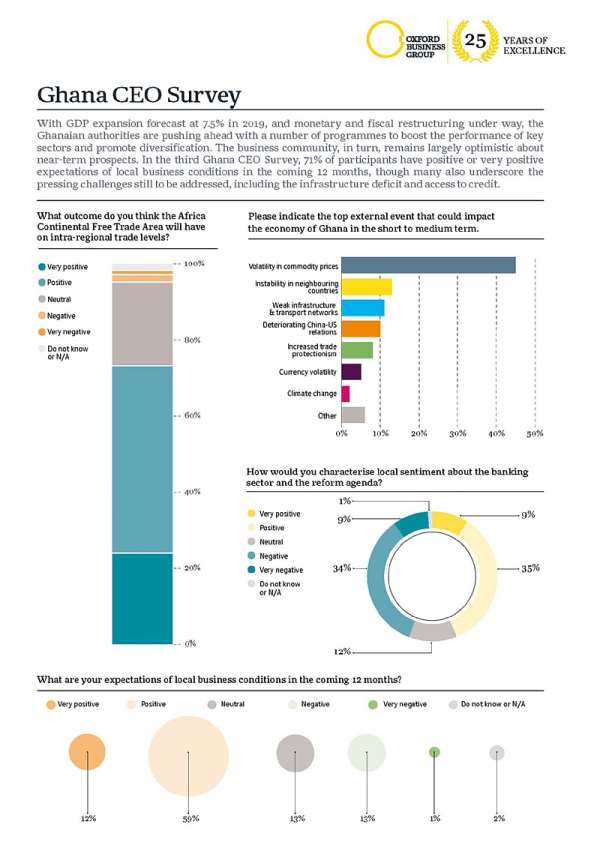 Executives interviewed for the 2019 edition of the Business Barometer: Ghana CEO Survey carried out by Oxford Business Group (OBG) were broadly positive about the country’s prospects.

As part of its survey on the economy, the global research and advisory firm asked around 100 C-suite executives from across Ghana’s industries a wide-ranging series of questions on a face-to-face basis aimed at gauging business sentiment. The results are now available to view in full on OBG’s Editors’ Blog at: https://oxfordbusinessgroup.com/blog/souhir-mzali/obg-business-barometer/ghana-ceo-survey

The survey was launched at the fourth quarterly GIPC CEOs’ breakfast meeting on Thursday December 12, titled “Ghana On the Go!” Organised by the Ghana Investment Promotion Centre, in collaboration with OBG and Impact Investing Ghana, the event took place at the Marriott Hotel, Airport City, Accra, in the presence of high-profile representatives from the private and public sectors.

From those interviewed, 71% of respondents described their expectations of local business conditions as positive or very positive for the coming 12 months, while 68% viewed the level of transparency for conducting business in the country relative to the West African region as high or very high.

Executives were also upbeat about the Africa Continental Free Trade Area (AfCFTA), which will be headquartered in Ghana’s capital Accra, and the benefits it could bring to the region, with 73% expecting it to have a positive impact on intra-regional trade levels.

Reactions to the banking reform agenda were mixed with almost half (44%) of the survey participants describing local sentiment surrounding the reform agenda as positive or very positive, while 43% described it was negative or very negative. The banking sector reforms have formed a key part of the government’s efforts to restore macroeconomic stability in recent years, and the ambivalence observed in the survey results can be explained by the fact that while most people agree the reform agenda is a much-needed measure to reap longer-term benefits, many remain preoccupied by its short-term implications, particularly on liquidity and credit availability.

OBG’s survey also highlighted business leaders’ concerns over the destabilising impact on the economy of commodity price fluctuations. A plurality (43%) of those interviewed chose volatility in commodity prices as the top external event they felt could impact Ghana’s economy in the short to medium term, well ahead of instability in neighbouring countries (selected by 13%) and weak infrastructure and transport networks (11%).

Commenting in her blog, Souhir Mzali, OBG’s Regional Editor for Africa, said that Ghana has taken bold steps in recent years, earning it a clean bill of health from the IMF in 2019 after successfully concluding a three-year credit deal with the institution in April to improve fiscal management and strengthen public finances.

“Our survey results point to a striking bullishness on behalf of Ghana’s business community and this is indicative of their confidence in the ongoing reforms despite some of the short-term preoccupations like the impact these are likely to have on credit availability, particularly for small and medium-sized enterprises,” she noted. “The short term pains resulting from the ongoing reform agenda are required to produce much-needed longer-term benefits”

Mzali added that OBG’s survey also reaffirmed the need for Ghana to maintain momentum in its efforts to steer growth away from traditional export commodities including gold, cocoa, and hydrocarbons, and continue diversifying the economy. “As with our previous survey findings, volatility in commodity prices continues to be the main preoccupation of business leaders,” she said.

Turning to the AfCFTA, Mzali noted that although expectations were high in Ghana for the role it could play in boosting trade within the region, business leaders were aware of the challenges that could delay or limit the initiative’s success.

“While 73% of participants have positive or very positive feelings about the impact of the AfCFTA on regional trade levels, most pointed to the need to address the many pressing obstacles to its implementation, among them infrastructure, which requires up to $170bn in investment annually across the continent, according to the African Development Bank,” she said.

Mzali’s in-depth analysis of the survey’s results can be found on OBG’s Editor’s Blog ,

titled ‘Next Frontier’. All four of OBG’s regional managing editors use the platform to share their expert analysis of the latest developments taking place across the sectors of the 30+ high-growth markets covered by the company’s research.

The OBG CEO Surveys feature in the Group’s extensive portfolio of research tools. The full results of the survey on Ghana will be made available online and in print. Similar studies are also under way in the other markets in which OBG operates.

This survey has been designed to assess business sentiment amongst business leaders (Chief Executives or equivalent) and their outlook for the next 12 months. Unlike many surveys, the OBG Business Barometer is conducted by OBG staff on a face-to-face basis, across the full range of industries, company sizes and functional specialties. The results are anonymous.

OBG Business Barometer is based on data from companies with revenue within the following parameters, among others:

The Ghana CEO Survey is based on data from companies within the following parameters, among others:

• 88% of companies surveyed were private

• 34% of companies surveyed were international

• 9% of companies surveyed were regional

• 57% of companies surveyed were local

The data generated allows for analysis of sentiment within an individual country, as well as regionally and globally. Additionally, comparisons can be drawn between both individual countries and regionally. The results are presented statistically within infographics and discussed in articles written by OBG Managing Editors.

OBG provides this survey, infographics and accompanying analysis from sources believed to be reliable, for information purposes only.

OBG accepts no responsibility for any loss, financial or otherwise, sustained by any person or organisation using it. For further information on the content of the survey, please contact Souhir Mzali, Regional Editor, Africa, at [email protected] Should you wish to reproduce any element of this survey, infographics and accompanying analysis please contact: [email protected] . Any unauthorised reproduction will be considered an infringement of the Copyright. For further details about OBG and how to subscribe to our widely acclaimed business intelligence publication please visit www.oxfordbusinessgroup.com

Oxford Business Group (OBG) is a global research and advisory company with a presence in over 30 countries, from Africa, the Middle East and Asia to the Americas. A distinctive and respected provider of on-the-ground intelligence on the world’s fastest growing markets for sound investment opportunities and business decisions.

Through its range of products – Economic News and Views; The OBG CEO Survey; OBG Events and Conferences; Global Platform, which hosts exclusive video interviews; The Report publications – and its Consultancy division, OBG offers comprehensive and accurate analysis of macroeconomic and sectoral developments.