Bright Simons Speaks At 'We The Future' TED Event 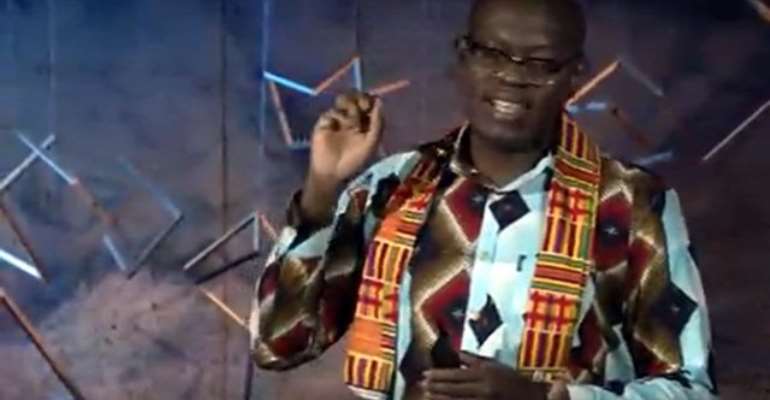 To address the problem of counterfeit goods, African entrepreneurs such as Bright Simons have come up with innovative and effective ways to confirm products are genuine.

Now he asks: Why aren't these solutions everywhere? From password-protected medicines to digitally certified crops, Simons demonstrates the power of local ideas and calls on the rest of the world to listen up.

This talk was presented at ‘We the Future,’ a special event in partnership with the Skoll Foundation and the United Nations Foundation.

Below is a transcript of his full presentation in September 2019.

I am an ideas activist. That means I fight for ideas I believe in to have their place in the sun, regardless of which side of the equator they were born. As well I should. I myself am from that part of the world often euphemistically referred to as either "the Global South" or "the developing world." But let's be blunt about it: when we say those words, what we really mean is the poor world -- those corners of the world with ready-made containers for the hand-me-down ideas of other places and other people.

But I'm here to depart a little bit from the script and to try and convince you that these places are actually alive and bubbling with ideas. My real issue is: Where do I even start? So maybe Egypt, Alexandria, where we meet Rizwan. When he walks outside his souk, walks into a pharmacy for heart medicine that can prevent the blood in his arteries from clotting, he confronts the fact that, despite a growing epidemic that currently accounts for 82 percent of all deaths in Egypt, it is the medicines that can address these conditions that counterfeiters, ever the evil geniuses they are, have decided to target. Counterfeiters making knockoff medicines.

Luckily for Rizwan, my team and I, working in partnership with the largest pharmaceutical company in Africa, have placed unique codes -- think of them like one-time passwords -- on each pack of the best-selling heart medicine in Egypt. So when Rizwan buys heart medicine, he can key in these one-time passwords to a toll-free short code that we've set up on all the telecom companies in Egypt for free. He gets a message -- call it the message of life -- which reassures him that this medicine is not one of the 12 percent of all medicines in Egypt that are counterfeits.

From the gorgeous banks of the Nile, we glide into the beautiful Rift Valley of Kenya. In Narok Town, we meet Ole Lenku, salt-of-the-earth fellow. When he walks into an agrodealer's shop, all he wants is certified and proper cabbage seeds that, if he were to plant them, will yield a harvest rich enough that he can pay for the school fees of his children. That's all he wants. Unfortunately, by the reckoning of most international organizations, 40 percent of all the seeds sold in Eastern and Southern Africa are of questionable quality, sometimes outrightly fake. Luckily for Ole, once again, our team has been at work, and, working with the leading agriculture regulator in Kenya, we've digitized the entire certification process for seeds in that country, every seed -- millet, sorghum, maize -- such that when Ole Lenku keys in a code on a packet of millet, he's able to retrieve a digital certificate that assures him that the seed is properly certified.

From Kenya, we head to Noida in India, where the irrepressible Ambika is holding on very fast to her dream of becoming an elite athlete, safe in the knowledge that because of our ingredients rating technology, she's not going to ingest something accidentally, which will mess up her doping tests and kick her out of the sports she loves.

Finally, we alight in Ghana, my own home country, where another problem needs addressing -- the problem of under-vaccination or poor-quality vaccination. You see, when you put some vaccines into the bloodstream of an infant, you are giving them a lifetime insurance against dangerous diseases that can cripple them or kill them. Sometimes, this is for a lifetime. The problem is that vaccines are delicate organisms really, and they need to be stored between two degrees and eight degrees. And if you don't do that, they lose their potency, and they no longer confer the immunity the child deserves. Working with computer vision scientists, we've converted simple markers on the vials of vaccines into what you might regard as crude thermometers. So then, these patterns change slowly over time in response to temperature until they leave a distinct pattern on the surface of the vaccine, such that a nurse, with a scan of the phone, can detect if the vaccine was stored properly in the right temperature and therefore is still good for use before administering this to the child -- literally securing the next generation.

These are some of the solutions at work saving lives, redeeming societies, in these parts of the world. But I would remind you that there are powerful ideas behind them, and I'll recap a few. One, that social trust is not the same as interpersonal trust. Two, that the division between consumption and regulation in an increasingly interdependent world is no longer viable. And three, that decentralized autonomy, regardless of what our blockchain enthusiasts in the West -- whom I respect a lot -- say, are not as important as reinforcing social accountability feedback loops. These are some of the ideas.

Now, every time I go somewhere and I give this speech and I make these comments and I provide these examples, people say, "If these ideas are so damn brilliant, why aren't they everywhere? I've never heard of them." I want to assure you, the reason why you have not heard of these ideas is exactly the point I made in the beginning. And that is that there are parts of the world whose good ideas simply don't scale because of the latitude on which they were born. I call that "mental latitude imperialism."

That really is the reason.

But you may counter and say, "Well, maybe it's an important problem, but it's sort of an obscure problem in parts of the world. Why do you want to globalize such problems? I mean, they are better local." What if, in response, I told you that actually, underlying each of these problems that I've described is a fundamental issue of the breakdown of trust in markets and institutions, and that there's nothing more global, more universal, closer to you and I than the problem of trust. For example, a quarter of all the seafood marketed in the US is falsely labeled. So when you buy a tuna or salmon sandwich in Manhattan, you are eating something that could be banned for being toxic in Japan. Literally. Most of you have heard of a time when horsemeat was masquerading as beef in burger patties in Europe? You have. What you don't know is that a good chunk of these fake meat patties were also contaminated with cadmium, which can damage your kidneys. This was Europe. Many of you are aware of plane crashes and you worry about plane crashes, because every now and then, one of them intrudes into your consciousness. But I bet you don't know that a single investigation uncovered one million counterfeit incidents in the aeronautical supply chain in the US.

So this is a global problem, full stop. It's a global problem. The only reason we are not addressing it with the urgency it deserves is that the best solutions, the most advanced solutions, the most progressive solutions, are, unfortunately, in parts of the world where solutions don't scale. And that is why it is not surprising that attempts to create this same verification models for pharmaceuticals are now a decade behind in the USA and Europe, while it's already available in Nigeria. A decade, and costing a hundred times more. And that is why, when you walk into a Walgreens in New York, you cannot check the source of your medicine, but you can in Maiduguri in Northern Nigeria. That is the reality.

That is the reality.

So we go back to the issue of ideas. Remember, solutions are merely packaged ideas, so it is the ideas that are most important. In a world where we marginalize the ideas of the Global South, we cannot create globally inclusive problem-solving models. Now, you might say, "Well, that's bad, but in such a world where we have so many other problems, do we need another cause?" I say yes, we need another cause. Actually, that cause will surprise you: the cause of intellectual justice. You say, "What? Intellectual justice? In a world of human rights abuses?" And I explain this way: all the solutions to the other problems that affect us and confront us need solutions. So you need the best ideas to address them. And that is why today I ask you, can we all give it one time for intellectual justice?