Joy FM’s Scars Of The Revolution Documentary: My Views 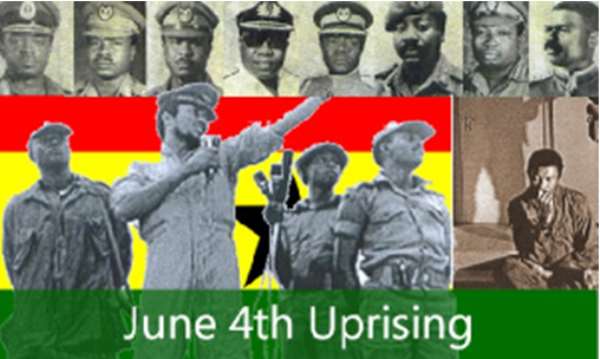 Undoubtedly, history is good because historical accounts help an individual, a community and a nation to remember happenings in the past and to learn good and corrective lessons from such occurrences. As such, Joy FM’s revisit of revolutionary atrocities within the fabric of independent Ghana through a documentary dubbed “Scars of the Revolution” cannot be said to be a bad venture in its entirety.

However, such a venture becomes problematic when it is done selectively and not comprehensive enough to expose all the revolutionary scars in the country at different times in the past. The “Scars of the Revolution Documentary” was hyped and widely advertised using some of its excerpts and it had already ignited some exchange of verbal salvos between Former President Rawlings and Major (Rtd) Boakye Gyan as well as between Former President Rawlings and Major (Rtd) Ibrahim Rida even before the full documentary was shown.

Finally, the much-awaited documentary was aired on some multimedia channels last night and personally, I became sorrowful with the reminder of some of the scars but at the same time, I found the documentary as a selective account of the scars of the revolutions that occurred in Ghana over the years. I assert so because I was glued to my television set in the days of the National Reconciliation Commission (NRC) investigations or sittings and I had read the voluminous NRC report. I still have a copy. I am therefore educated enough to submit that Joy FM’s current documentary is nothing but only an insignificant portion of the NRC report highlighted and produced.

It is not disputatious that the general public believes media accounts and anytime the media even make a mendacious publication, people immediately believe it to be true. That is why media houses must be cautious of things that they bring to the public domain, in which form and at what time. By this, I do not seek to say that the plot of the documentary is false but I want to emphasize that it is selective perhaps for a given agenda.

The documentary in question only focused chiefly on the days of the Armed Forces Revolutionary Council (AFRC) and did not even dwell much on atrocities committed in the Provisional National Defense Council (PNDC) days from 1981 to 1992 let alone going back to the earlier revolutions before AFRC and PNDC. We should equally be told about the atrocities committed by the Committees for the Defence of the Revolution (CDRs) under the PNDC. I personally witnessed CDR officers who tortured one Mr. Agbesi at Mepe by placing two cement blocks on his waist and made him move his waist up and down as though he was having sex with mother earth.

Besides, the National Reconciliation Commission served a subpoena on Former President Rawlings and he appeared before the NRC and testified. Other officers and personalities equally did so. What venture is Joy FM pursuing that they only captured a clip of Rawlings speaking to a foreign journalist but they failed to show us his testimony before the NRC? In any case, Rawlings is still alive and still a public figure.

In addition, there were revolutions in Ghana in 1966, 1972, 1978 (palace coup), 1979 and 1981. Focusing mainly on only the 1979 coup and its attendant atrocities in a documentary and leaving the rest untouched creates room for eyebrows to be raised regarding the impetus that necessitated such a documentary. In any case, the same Former President Rawlings was the principal brain behind the 1979 and 1981 revolutions.

In my considered view therefore, the Joy FM documentary on the scars of the revolution is partial and it has only created unnecessary passion rather than being comprehensive enough to educate the public especially the segment of the population that was not born in those days.

Any objective witness of the political scenes in Ghana over the years as well as any meticulous reader of the NRC report would agree with me that even democratically elected regimes left scars on some individuals and families. They still continue to do so even as we saw earlier this year in the Ayawaso West Wuogon by-election following the demise of Mr. Emmanuel Kwabena Kyeremateng Agyarko who was the MP of the area.

It should equally not be lost on us that the massive Kume Preko demonstration in 1995 happened under the watch of a democratically elected government with the same J.J. Rawlings as President. The Kume Preko protest on 11th May, 1995 was necessitated by the introduction of 17% Value Added Tax (VAT) in 1995. Kume Preko was not a revolution yet it left some significant scars. Perhaps the most indelible scar of that protest was how 14 year old the late Yaw Atta was shot in the chest and scrotum. Even the life of a beggar on the street was not spared. The magnitude of the scars left by the Kume Preko protest may equate that of a revolution due to many harrowing accounts of that demonstration. Perhaps Joy FM needs another documentary on that and we need to hear from the architects of Kume Preko such as Nana Addo Dankwa Akuffo-Addo (now our President), Charles Wereko-Brobbey, Kwasi Pratt Jnr., Akoto Ampaw, Napoleon Abdulai and some others. Again, the same Former President Rawlings definitely has some accounts to render for the Kume Preko killings since he was the President at the time.

Today, we still charge VAT with so many other unnecessary and nuisance taxes levied on the people but some people died for VAT and Kwasi Pratt Jnr. once referred to them as the martyrs of Kume Preko. Most of the Kume Preko victims who are still alive have not been compensated. Logically, one would expect that now that one of the Kume Preko organizers is the President of Ghana, those victims would have received justice or some handsome compensation packages but nothing of a sort has happened yet.

Even if there is the need for a documentary to remind us of the revolutionary scars that have been left on people, then we need a more comprehensive one, and not just a selective piece to inflame passion as Joy FM did last night. The Joy FM documentary has further strengthened the enmity some people already have for one another as we heard in the media in the case of Former President Rawlings, Major (Rtd) Boakye Gyan and Major (Rtd) Ibrahim Rida.

In summary therefore, we need a more comprehensive account or documentary of all the scars left on the nation by both military and democratic regimes. Otherwise, we should let sleeping dogs lie. Currently, we have a lot of economic hardships and several other societal problems to think of and strategize as a nation to solve. A partial documentary of a sort should not be used to distract our productive attention from the very important issues concerning us in contemporary times. For now, let us focus on the depreciated cedi; the bushy roads of Accra; the dark streets at night; the filthy cities; the extremely deplorable roads across the nation; the high fuel prices; the hiked utility charges; the bushy Efua Sutherland Children’s Park; the issues of corruption; the over delayed reimbursement of NHIS Claims to healthcare providers especially the public hospitals; recovery of investments from the collapsed financial institutions and many more.