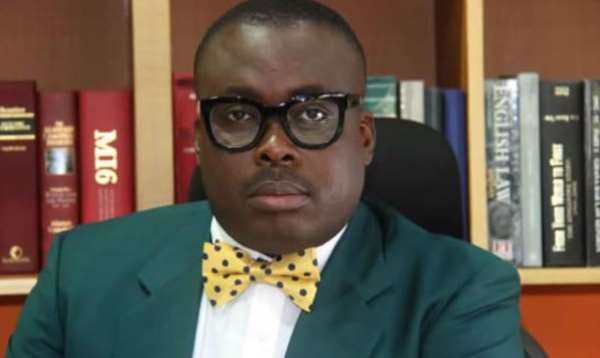 Ace broadcaster, Paul Adom-Otchere has said the nomination of Justice Anin Yeboah as the new Chief Justice of Ghana did not come as a surprise.

Mr. Adom-Otchere had in an earlier interview tipped Justice Yeboah for the Chief Justice position following the retirement of Justice Sophia Akuffo.

Adom-Otchere, on Eyewitness News, said Justice Anin Yeboah’s nomination was expected, given the key role he played in the election petition case.

“It does not come as a surprise to many people who have been following the situation. If you look at the analysis that many lawyers have made, Anin Yeboah was involved in that election petition and our basis for coming to the conclusion is that given the President’s extensive familiarity with the court — because he has done forty years at the bar — he is one politician who has had an extensive legal career so in terms of looking at who becomes the next Chief Justice, he has a lot of expertise to be able to make that decision.”

“And if we were going to consider that, then the President will look at those cases that are important in terms of his legal career and in terms of that, the election petition will be that which is important…As a petitioner, he [Nana Akufo-Addo] went to court with the view that the election violated the law and was not a good election so it appeared that Anin Yeboah completely agreed with him so that was a likeminded platform. So it was on this basis that we suspected that the President was making this decision. It looks like we guessed right and we wait to see what will happen,” the ace broadcaster added.

Mr. Anin Yeboah was part of the nine-member panel who sat on the infamous election petition case.

His nomination to the revered position was announced in Parliament on Thursday.

The President, Nana Akufo-Addo forwarded the name of Justice Yeboah to Parliament, as required by Article 144 (1) of the 1992 Constitution.

Justice Yeboah is expected to face the Appointments Committee in the coming days.

If approved by Parliament, Anin Yeboah will be the 7th Chief Justice of Ghana in the Fourth Republic. 'Dotse should have been Chief Justice, not Anin Yeboah' – Inusah Fuseini

According to him, the most Senior Justice at the Apex Court, Justice Jones Dotse should have been nominated instead.

Reacting to the news of Justice Yeboah’s nomination, the Tamale Central MP could not fathom how Justice Dotse was bypassed.

He lamented that this nomination means that “the chances of Dotse [to be Chief Justice] are closed because he is older than Anin Yeboah.”

“Justice Dotse was my prefered candidate because he is the most senior [judge] on the bench… at the time that they were appointing Sophia Akuffo, Dotse's name came up forcefully.”

About the new Chief Justice nominee

He was appointed to the Supreme Court by President John Agyekum Kufuor in June 2008.

In May 2017, he was appointed the Chairman of the Disciplinary Committee of the Federation of International Football Associations (FIFA).

In September 2019 he was named onto the CAF/FIFA Reform Implementation Taskforce team for African football.