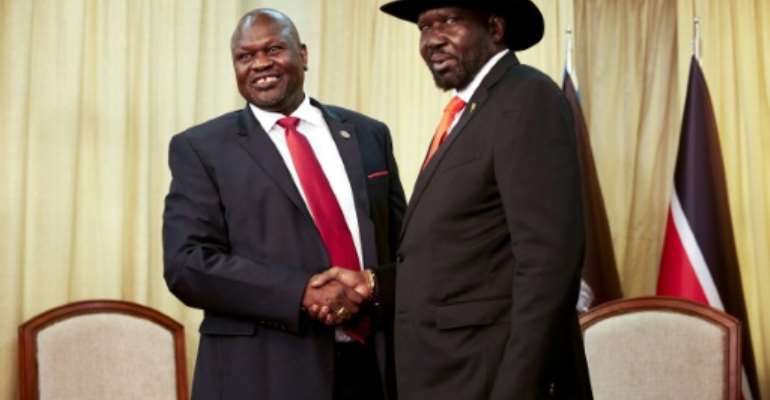 The United States said Thursday it would restrict visas to South Sudanese who undermine peace efforts in its latest protest over the long delay in formation of a unity government.

Secretary of State Mike Pompeo said the United States would deny visas to individuals who "undermine or impede the peace process in South Sudan."

"The people of South Sudan have suffered enough while their leaders delay the implementation of a sustainable peace," Pompeo said in a statement.

"The South Sudanese deserve leaders who are committed to building consensus and willing to compromise for the greater good," he said.

Pompeo did not list the individuals who would be affected but said their immediate family members could also be denied visas.

The United States has been a key backer of the impoverished, largely Christian nation, which won independence in 2011 after years of conflict with then military rulers of Arab- and Muslim-dominated Sudan.

But the United States has been frustrated by continued bickering between President Salva Kiir and his former deputy Riek Machar, whose rift has led to a conflict that has killed nearly 400,000 people and displaced four million -- one-third of the country's population.

Kiir and Machar held a rare, brief meeting on Wednesday in the capital Juba. On November 12, African mediators gave them 100 days to form a unity government under a peace plan, the second such extension.

The United States has already withdrawn its ambassador for consultations, although it has not touched its roughly $1 billion in annual aid to South Sudan, which largely goes to food and other immediate needs.

The United States also imposed sanctions this week on International Human Rights Day against five South Sudanese over the killings of an opposition activist and a human rights lawyer.

According to the Treasury Department, the pair were kidnapped in January 2017 from Nairobi and brought to South Sudan where they were reportedly killed on orders of the South Sudanese government.

Those sanctions ban travel to the United States, freeze any assets the five men may have in the country and criminalize financial transactions with them.