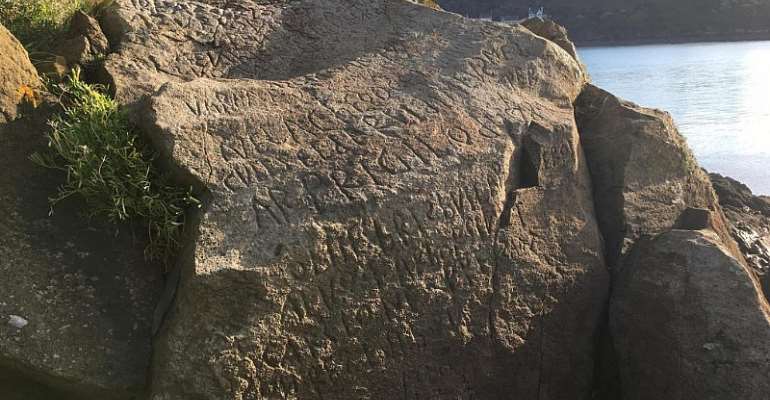 Proposals have come from around the world in response to a contest to decipher a mysterious eighteenth-century rock engraving in western France that seems to have something to do with the Brittany region's unique language, history and culture.

When officials in the town of Plougastel-Daoulas announced a contest to decode a mystery that has baffled the community for generations, they did not expect to attract the attention of would-be riddle-solvers in Thailand.

But in the age of the Internet, news that the town near Brest on the western tip of Brittany in northwest France was offering 2000 euros to anyone who could interpret a cryptic rock engraving had instant international reach.

“The contest spread around the world on social media,” says Véronique Martin, who came up with the idea of holding a competition to solve the enigma. “It's mainly attracted treasure hunters, or people who are passionate about research and solving mysteries.”

After announcing the contest in May, Martin received some 2000 queries and considerable attention in the national and international media. Her office sent out 600 application forms within the first month and a half of the contest.

The contest closed at the end of November and yielded 59 proposals from five continents, mostly from around France but also from Romania and Spain as well as Canada, the United States, Russia, Argentina, Australia and Thailand.

Organisers say they amount to 1500 pages, in French and English.

Nearby fort suggests historic link
The rock sits on a little headland in the strategically significant harbour of Brest. The site is only accessible when the tide is out, but the engraving itself sits above water year-round, suggesting whoever made it knew the site well.

“They had expertise in sculpting and the material,” says Michel Paugam, who deals with the town's heritage and historical sites. “Writing we're less sure, it's possible someone else was telling the engraver what to do, but they were definitely from the profession. They knew how to etch into stone.”

The inscription consists of about 20 lines of texts, symbols and dates including 1786 and 1787, which correspond to a period that France was at war with England and its army was renovating a defensive site called the Fort du Corbeau, or Crow's Fort, half a kilometre up the beach.

“Maybe people working in the fort had free time to come here in the evening,” Paugam says. “It takes time to engrave like that, at least several days. Perhaps they set up a campfire over there, a picnic over there, and one of them worked on the inscription.”

The period was also marked by upheaval that led to the French Revolution. The presence of a sacred heart suggests a reference to the Chouans, a royalist and Catholic rebellion against revolutionary forces that spread through Brittany from the Vendée region in the late part of the century.

Breton language offers cryptic clue
The language of the inscription is another big part of the mystery.

There is wide consensus that it is at least partly in Breton, a Celtic language that came to Brittany from Britain in the Early Middle Ages and that a majority of people in the region spoke for centuries.

Due to long-term French government efforts to suppress regional languages, only about 200,000 people speak Breton today, and Unesco lists it as a language in danger.

Breton specialist François-Pol Castel has participated in efforts to revive the teaching of the language to younger generations. His uncle learned of the rock in 1979 and published a transcription in a regional archaeological revue in 1984, but no one has come up with a convincing translation so far.

“I have studied the inscription myself, and I have found a number of words that can be Breton,” he says, identifying words for “forever”, “clay” and “nest”. “Of course, those words could be in some other language, but they are all Breton words, as well.”

Breton had no standardised spelling in the eighteenth century, meaning the inscription would have been made phonetically. In all, Castel has found about 20 potentially Breton words, less than half of the total, and they are not consistent enough to suggest a theme.

But there is one full phrase in the language, and it sends an intriguing message.

“'Through these words you will see the truth.' That's the translation of the sentence at the very top of the inscription,” Castel says. “So it is very mysterious, isn't it?”

Many languages detected
The notion that the inscription may be in a kind of code led organisers to name the contest Le Mystère Champollion in honour of eighteenth-century French philologist Jean-François Champollion, whose deciphering of the trilingual Rosetta Stone helped establish modern Egyptology.

While organisers are not promising the same renown, the search for a solution to the mystery of the rock at Plougastel-Daoulas is in the same spirit.

“It might be a mix of several languages or even codes that would have been familiar to members of certain professions, particularly among sculptors,” suggests town official and contest jury member Stéphane Michel.

Various observers have detected elements of the Basque and Chouan languages, as well as Spanish, Catalan and even Russian, owing to some letters resembling characters of the Cyrillic alphabet.

“Plougastel is close to Brest, and Brest is a big port, and as in all big ports you can meet sailors from all over the world, speaking all kinds of languages,” says Castel. “That's for sure, but it doesn't tell us what language the stone was carved in.”

Many secrets raise many theories
The mystery has raised a wide range of hypotheses and explanations.

One claims the inscription is a prayer to Jesus, seeking protection from the devil. An entry in the contest involves extensive research into families in the region.

A more outlandish proposal claims the 7s in the year inscriptions are actually 1s, meaning the message is 600 years older that thought and that the inscription is in Old Gaelic.

For organisers, no theory should be dismissed.
“We're certain there's a logic to the sentences, to the alignment of words,” says Stéphane Michel. “It's not just someone who engraved a letter here and a letter there. They had something to say, but for now we're not sure of the language. That's why we're interested in all the theories about it.”

The jury, made of town officials as well as specialists in Breton language, history and archaeology, hope to announce a result in early 2020.