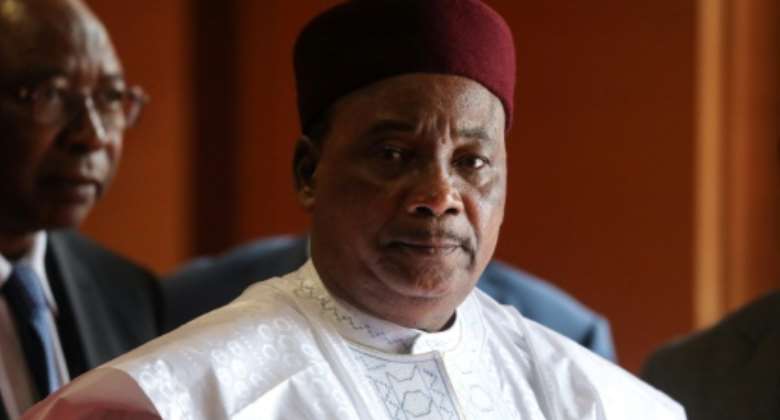 Strategies to roll back jihadism in the Sahel have been dealt a body blow by a massive attack on an army base in Niger that left scores of dead and missing.

The brazen assault Tuesday at Inates, in the remote region of Tillaberi, was carried out by "many hundreds" of heavily armed jihadists, the defence ministry says.

Seventy-one military personnel were killed, 12 injured and "others" are missing, according to the ministry's statement, aired on nationwide TV.

The political fallout from the attack -- the bloodiest in Niger since 2015, when the insurgency began to spill over from neighbouring Mali -- was immediate.

Map of Niger locating the jihadist attack on a military camp that killed at least 71 soldiers on Tuesday.. By AFP (AFP)

Nigerien President Mahamadou Issoufou raced back in the night from a security and development conference in Egypt to chair a meeting of the National Security Council in Niamey on Thursday.

In France, President Emmanuel Macron postponed a summit, due to take place in the southwestern city of Pau next Monday, that was to gather him and five Sahel presidents.

Macron had scheduled the meeting so that the five leaders could "clarify" their position on the French military presence in the Sahel.

That is short-hand for requesting a show of support for troops that are shoring up their fragile governments, but now facing protestors who characterise them as a foreign, even "neo-colonial", force.

In the last four months, more than 230 soldiers in Niger, Mali and Burkina Faso have lost their lives, in addition to 13 French troops who were killed in a helicopter collision while chasing jihadists in northern Mali.

That is in addition to the thousands of civilians who have died, and more than a million who have been displaced since the jihadist revolt began in Mali in 2012.

Instead of hit-and-run raids by a small group of Kalashnikov-armed guerrillas, the jihadists are now carrying out operations that involve hundreds of fighters, armed with mortars and suicide vehicles.

Ranged against them are the impoverished armies of Chad, Burkina Faso, Mali, Mauritania and Niger, plus the 4,500-man French force in the Sahel and the 13,000-man UN force in Mali, MINUSMA.

Grappling with an elusive, fast-moving enemy, French thinking is shifting to a response that combines speed, stealth and advanced weapons.

The French armed forces have said they will arm their drones, enabling them to make strikes on ground targets without losing time or endangering men by calling up air strikes.

France was expected to press its partners in the European Union, at a summit in Brussels on Thursday and Friday, to beef up support for the fight against jihadism in the Sahel.

The G5 Sahel force, which France is backing in the hope that it will help it to draw down its own troops in the region, is struggling from funding problems, shoddy or outmoded equipment and poor training.

Paris, separately, is also setting up an operation called Tacouba, which will bring in special forces from a number of European countries, to help the Malian army.