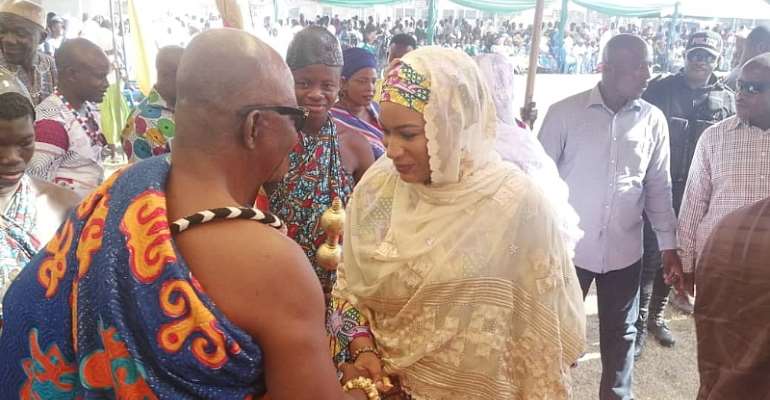 Second Lady Samira Bawumia has said the challenges facing Ghanaians are so enormous that only a committed leader like President Akufo-Addo can help solve them.

According to her, only three years into the Akufo-Addo government things are changing for the better and the country is seeing positive accelerated development.

The Second Lady said this when she met chiefs and people of Pru West and East and Atebubu Amantin in the Bono East Region during a working tour of the area.

She thanked the people for voting the NPP to power and also explained government's policies to them. She said President Akufo-Addo walks the talk and would do everything possible to solve the problems confronting Ghanaians and make Ghana a better place for all.

“President Akufo-Addo promised One Village, One Dam; One District, One Factory; One District, One Warehouse; restoration of nurses and teachers' allowances, Planting for Food and Jobs, NABCO and Free SHS, and all these have come to pass in only three years,” she stated.

She also said the President had led a strong team to build the economic foundation of the country and Ghana was ready for what she called 'economic takeoff.'

She appealed to the people to vote for President Akufo-Addo again in 2020 to enable him to continue the good works he has already started.