Nursing Mother, 5 Others Nabbed For Robbery 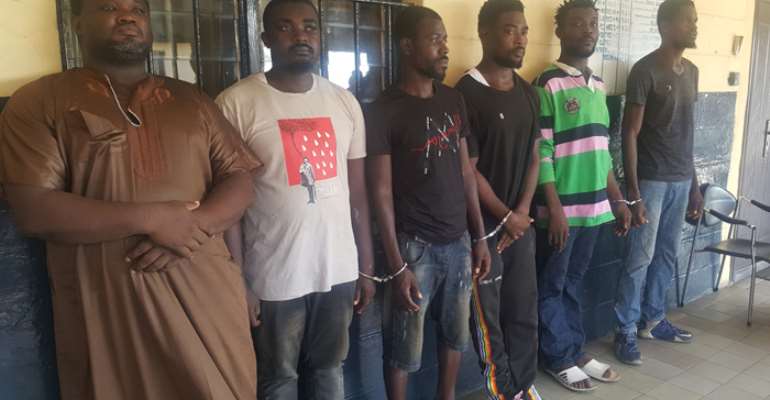 Six suspected armed robbers including a nursing mother have been picked up by the Accra regional police command for robbery.

They were grabbed in a two-week operation conducted by the regional command early this month.

He said Takyi's task was to procure weapons for the robbery operation, which he agreed and further recruited suspect Otibu from Toma, near Amasaman to join the gang. Kaizer again recruited suspect Dzedzom as a driver, for the operation.

On November 20, 2019, at about 5:00pm, according to DCOP Anim, police acting on intelligence trooped their secret location at Sukura where four of the suspects were grabbed smoking dried leaves suspected to be Indian hemp in preparation for the said operation.

Following further interrogation, suspect Abdulai, a spiritualist who performs rituals for the gang before they embark on their operations was arrested and the police found on him a pistol and two rounds of ammunition and two empty AK 47 shells.

He continued that their intelligence again led to the arrest of suspect Dorkenu, the wife of Takyi as another accomplice.

On hearing of the husband's arrest, she handed over a foreign pistol belonging to her husband to one Iddi (currently at large), in an attempt to conceal evidence against the husband.

He revealed that the arrest of Eunice led the police to the further discovery of five rounds of pistol ammunition wrapped in a rubber bag and buried in the ground.”

DCOP Anim confirmed that the suspects had admitted to the offence and further confessed to the police a series of crimes they were involved in which occurred in Accra, including two robberies at an area near Trassacco, where victims were robbed and raped and the robbery of mobile money shops at Atadeka and Zenu, all suburbs of Ashiaman.

All the suspects have been remanded into lawful custody as investigations continue and would reappear on December 18, 2019.