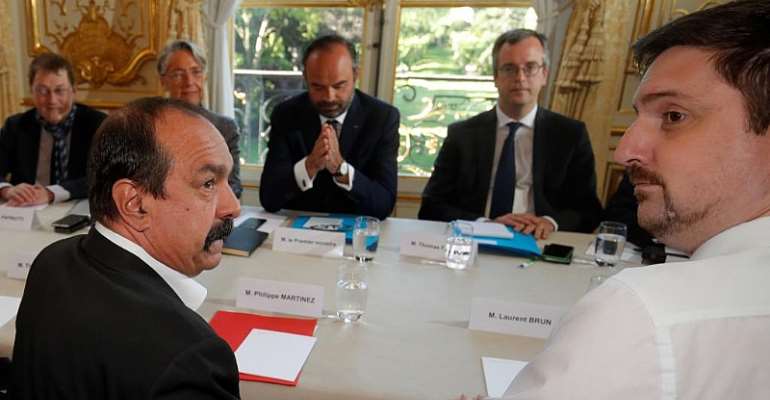 France's CGT union said on Thursday there would be no break in transport strikes over the Christmas period unless the government backed down on pension reform.

"No Christmas break unless the government comes to its senses," Laurent Brun, head of CGT's railway branch, said on the Franceinfo radio station.

Christmas misery
Asked if the statements made on Wednesday outlining the propose pension reform changed anything, he replied:

“Absolutely nothing, since [what is proposed] is a systemic reform that changes the principle [of pension calculation]. We are moving to the point system and we oppose the point system for at least two reasons. First reason: it is a calculation [based] on the whole career that will make everyone lose a lot of [the value of his/her] retirement. Second objection: we are not sure about the value of the point, so nobody will know with what level of retirement he, or she, leaves. It is a stepping stone for individual savings and for a funded system.”

He added: The strike [will] continue until we are assured that the current system is maintained…and negotiations are under way to improve this system.”

His comments come a day after Prime Minister Edouard Philippe said French people needed to work two years longer to get a full pension, drawing a hostile response from trade unions who said they would step up strike action to force an about-turn.

In a speech that followed days of protests and industrial action, Philippe outlined an overhaul of France's pension system that he claimed would be fairer and plug a gaping deficit in the pension budget.

The legal retirement age would remain at 62, Philippe said, but workers would be encouraged to work until 64 through a system of bonuses and discounts. That would allow a balanced pension budget by 2027, he said.

The reform-minded CFDT union, which until now has stayed out of the strikes, said a "red line" had been crossed and that it was calling on members to join mass protests on December 17.

Unrest escalates
The moderate CFDT's entry into the industrial action marks a perilous escalation for President Emmanuel Macron, just as more hardline unions show no sign of backing down in a battle of political will that could make or break his presidency.

"The time has come to build a universal pension system," the prime minister said in a much-anticipated speech. "I am determined to see this reform through because I believe it to be fair."

He showed some flexibility to unions over the timing, saying anyone within 17 years of retirement would be exempt – a longer period than the five years initially envisaged.

There would be a minimum pension of €1,000 per month for those who worked a full career, Philippe added.

For people entering the workforce, the reforms will only start to apply in 2022, which happens to be the last year of Macron's term.

Macron and his government will hope to create tangible benefits under a new universal system to divide those under the new regime from those who refuse to let go of old privileges, some of which date back centuries, analysts said.

The prime minister said that under the new system, every hour worked will earn pension rights, which will benefit gig economy workers such as bicycle couriers and office cleaners, who often do not earn enough to lock in pension rights under the current system.

But if the unions are able to draw more people out of the workplace, the strike which has crippled the transport network, closed schools and forced the cancellation of some flights could run for days, or longer.

Officials measured a logjam of some 460 kilometres (285 miles) of traffic in the Paris area on Wednesday, a day after more than 300,000 people protested against the government's plans across France.

Most Paris metro lines were shut on Thursday and many train routes remained cancelled as the strike entered its eighth day.

Following Philippe's speech on Wednesday, the head of the CGT union accused the government of turning a deaf ear to the strikers.

"We're not at all happy," CGT leader Philippe Martinez told LCI television. "It is a joke."