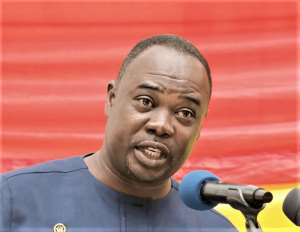 The Office of the Minister of State in Charge of Public Procurement has developed a code of conduct to guide the operations of procurement practitioners in the country.

It will serve as the highest ethics and standards code for benchmarking procurement practitioners, suppliers, contractors and service providers in accordance with the Public Procurement Act, 2003 (Act 663).

The Minister of State in Charge of Public Procurement, Ms Adwoa Safo, made this known in a speech read on her behalf at a forum in Accra on Wednesday.

Progress of work
The forum was organised by the Public Procurement Authority (PPA) to educate stakeholders, as well as the public on key policies and issues relating to procurement.

It was held on the theme: “Functional procurement units: a key to a sustainable public procurement system”.

Cabinet is also expected to give the final approval of the document.

"Breaches of the code of conduct will have disciplinary consequences or sanctions," Ms Safo said.

New policies
Additionally, Ms Safo said the office had formulated a draft policy for the allocation of at least 30 per cent of government procurements to companies owned by women, persons with disability and youth.

The move, she said, formed part of efforts by the government to achieve the Sustainable Development Goals (SDGs) on ending poverty and reducing inequality.

"This draft policy is intended to promote inclusiveness, equal opportunity and treatment in public procurement in Ghana," she stated.

Ms Safo further stated that her office was currently working to compile the past and present performance records of all contractors, consultants and suppliers in order to ascertain their performance abilities and their financial capabilities.

Ms Safo further noted that the worst performers would be suspended or debarred for a specified period to ensure fairness, accountability, integrity, transparency and value for money.

PPA to ‘bite’
The acting Chief Executive Officer of the PPA, Mr Frank Mante, warned that the authority would clamp down all procurement officers, as well as actors in procurement processes who would not comply with the procurement law.

He further said the PPA would embark on an assessment exercise to evaluate procurement officers’ records (procurement processes) and other actors in the process for the past two years.

During the assessment exercise, he said, any inconsistencies with the law would face prosecution.

Mr Mante noted that the PPA would liaise with the Attorney-General and the Special Prosecutor to sanction the persons who did not comply with the law.

“In times past, PPA did not push for people to be prosecuted for infractions of the law. Hence our determination to crack the whip now,” he stated.

He stated that the PPA had through the review of applications for both single source or restrictive tendering procedures saved GH¢2.75 billion over the past three years.

Survey
The Director of Compliance, Marketing and Evaluation of the PPA, Mr Eric Victor Appiah, in his presentation said a survey to ascertain whether selected institutions were complying with the Public Procurement Act (Act 663) on the establishment of procurement units showed that about 85 per cent of the public institutions had procurement units.

However, he said, the units had inadequate office space, as well as personnel and resources to work with.