Distribute The 96 Ambulances Packed At The Parliament House In Accra Now!!! - ATAG 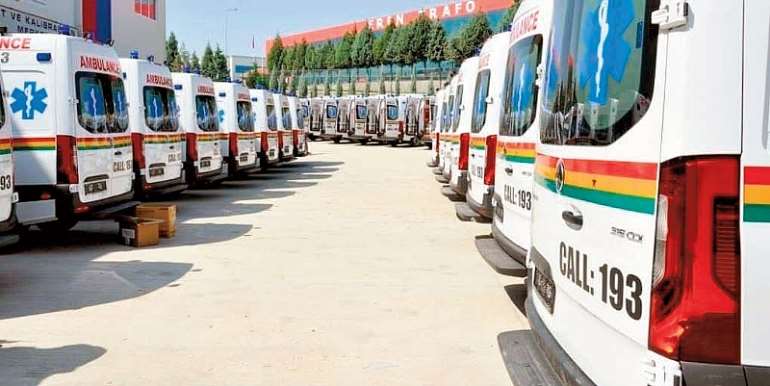 ATAG will first thank His Excellency Nana Addo Dunkwa Akufo Addo President of the Republic of Ghana for honouring his party’s manifesto promise of ensuring that each of the two hundred and seventy-five (275) constituencies nationwide have an ambulance. In fulfillment of this social contract you entered with the people of Ghana, your government has taken delivery of the first consignment of ninety six (96) ambulances packed at the parliament house in Accra. Though this singular move by your government to equip the National Ambulance Services (NAS) to meet its ultimate goal of ensuring that clients and patients that need these services are transported to the next level of care in a befitting, appropriate and timely manner to prevent needless deaths is not the first time in our current dispensation, it worth commendation as a little drops of water makes a mighty ocean. The National Ambulance Services (NAS) that was established in 2004 as an agency under Ministry of Health is charged with the responsibilities to establish and operate a nationwide comprehensive pre-hospital emergency service. It has over One hundred and thirty three (133) stations, with about ten regional control rooms across the country with well trained staff and some ambulances to attend to medical emergencies 24/7. Though the agency is over stressed with limited ambulances on road due to the break-down of most of the ambulances, it should not be abandoned by your government with the creation of a parallel organization to manage the new fleet of ambulances yet to be distributed to the constituencies as all government communications pointed to.

Unfortunately, Mr. President it is taking your government too long a time to push the first consignment of ninety six (96) ambulances received from the supplier to the deprived constituencies through NAS to save lives across the country as needless lives are being lost as a result of delays in transporting women in labour and patients in critical situation to the various levels of care that needs emergency attention. Mr. President it was in the light of this that the minority in parliament about a month ago led by its ranking member of the health committee in parliament, Hon. Kwabena Mintah Akandoh gave your government a three-day ultimatum to distribute the ambulances to the constituencies, which has since not adhered to. Again, as being serialize daily by TV 3 network where concerned Ghanaians are calling on you to distribute the ambulances packed at the parliament house in Accra under the mercy of the harsh weather is also over a month now and any further delays in distribution them will continue to make your government unpopular and therefore defeats any funfair or political capital your government is buying time to take in the distribution of the ambulances, comes January 2020 as indicated by your Minister of Special Initiative, Madam Mavis Hawa Koomson.

Certainly, Mr. President all these calls to you to do the needful thing should be taken in good faith and therefore adhered to immediately by instructing your ministers responsible for health and special initiative to distribute the ambulances through the NAS now, starting with the very deprived constituencies since all the constituencies will be given one ambulance in the course of time as planned. Mr. President Ambulance service as you are aware is a key component of the Ghana Health Service referral policy guidelines, however most of the constituencies in the five northern regions and possible other equally deprived constituencies across the country are without ambulances; especially the Sissala West constituency in the Upper West Region. It will interest you to know that, about two weeks ago, TV3 network premiered a damming documentary that focused on the Sissala West District; where the district currently has no a single ambulance to take care of its emergencies. To add insults to injuries, the documentary also showed that there is no community that is linked to the other with a bitumen road. Also, the Gwollu Health Center that was converted into a district hospital when the district was created some years back has seen no major development in terms of infrastructure and equipment to attain a true district hospital status. Therefore, most of the emergency cases are referred to Tumu, Jirapa and Nandom Hospitals respectively depending on the location of the referral facility in term of nearness to any of these adjoining district hospitals. This tells you Mr. President the difficulties and the challenges the populace of the district is going through when it comes to accessing transport during emergencies. Mr. President, it will shock you to know that the available means of transports used during emergencies in the district ranges from bicycles, motorbikes, donkey carts, cargo tracks, tractors, Motorking ambulances among others to transport patients and women in labour from the remote communities to the health facilities. This gloomy picture may not be peculiar to the Sissala West District alone, but most of the districts across the country.

Regrettably, Mr. President some of your party communicators are making mockery of the Motorking ambulances on national television as the only thing the John Mahama administration bequitted this nation. The Community Emergency Transport System (CETS) policy been rolled out by Ghana Health Service, where such Motorking ambulance are used including other means of transport based on the specific community arrangements to transport emergency cases to the various health facilities complements the National Ambulance Services as these ambulances cannot move into some of the remote areas, possibly where there are not even feeder roads. Indeed, the Motorking ambulances are playing key roles in the rural and peri-urban areas to prevent our women in labour and the general population during emergency from needless and preventable deaths. Interestingly, the Ghana government cannot even procure such Motorking ambulances to support the various communities but rather international donors such Ghana Swiss Redcross, KOICA among others are supporting the government to procure these Motorking ambulances and given to our communities free of charge.

Mr. President, the last time ATAG sighted your convoy on Friday 29th November, 2019 Bolgatanga in the Upper East Region; there was an ambulance among the army of your expensive land cruisers. With all these strong vehicle you were using, you still saw it wise to move with an ambulance. We believe you value your life and will not leave anything to chance when it comes to protecting your life and the lives of your entourage. It was clear that you have prepared for any eventualities, to enable your team respond appropriately during emergencies. Mr. President, this is just your convoy which was about fifty to hundred people, but a fully equipped ambulance follows you. So, you can imagined a whole constituency like Sissala West District where there is no one single ambulance for emergency response services. Indeed, just us we all valued your life and will go the extra miles to protect your life as our president; it is important as the President of this nation to demonstrate that you indeed value and care for the lives of Ghanaians across this country by ensuring that the 96 ambulances are immediately distributed to the constituencies. This would help create and spread the opportunities across the length and breadth of this country for its people to also take care of eventualities and emergencies as we have learnt from you that ambulances matter since you move with an ambulance wherever you are going.

Consequently, Mr. President considering these precarious situation and the inhumane circumstances the citizenry of this country particularly the people of the Sissala West constituency go through in accessing health services during emergencies your government will not have the latitude and the laxity to continue marking time in the distribution of these ambulances to the deprived constituencies that urgently needed them. Though your government communicators are defending the indefensible with uncoordinated and incoherent arguments ranging from fixing tracker devices on the ambulances, training of emergency medical personnel to man the ambulances, the ambulances lack their full complements, waiting to receiving the full set of the over 275 ambulances before the ambulances are distributed.

Anyway, nobody is saying that the early distribution of the first consignment of the 96 ambulances will end all deaths in the country as your Minister for Special Initiatives indicated that “people are already dying anyway whether the ambulances are distributed now or in 2020 as planned”. Mr. President, let me borrow the words of Macbeth “death is a necessary end and will come when it will come”. However, the early distribution of the ambulances will tell how serious we are as nation with our Public Health Emergency Response Systems; where some deaths that would have caused by delays in accessing health care services during emergencies as a result non-availability of transport are curtailed.

Mr. President, though I had the cause to comment you with regards to the purchase of the ambulances, it is a drop in an ocean considering the magnitudes of the problems at hand especially in accessing transport during emergency at the rural level. ATAG, would have wished you adopted another strategy of “one area council one ambulance” going into the 2020 elections if our country is to breakthrough with the provision of ambulances.

Consequently, ATAG will not hesitates to join the likes of Hon. Kwabena Mintah Akandoh, TV3 network, the Civil Society Organizations and the many faceless and voiceless Ghanaians hoping to see these ambulances on road to demand the immediate distribution of the first consignment of 96 ambulances received by government to the deprived constituencies on or before Tuesday December 17, 2019. ATAG would however advise itself after the expiration of this ultimatum to your government by using all legally acceptable means to mount sustained pressure on your government to distribute the ambulances.