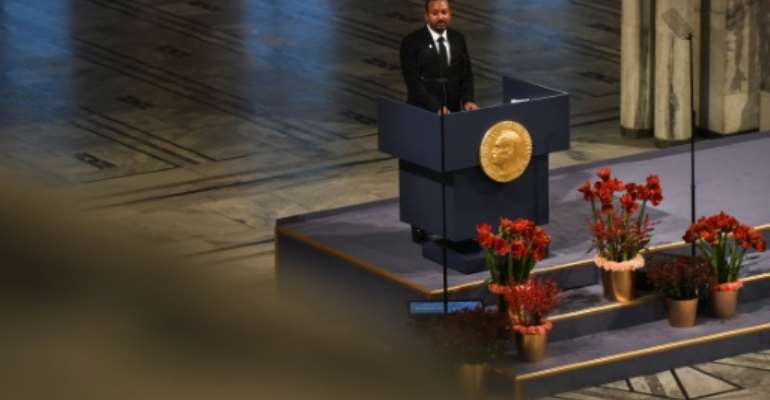 Abiy delivered a brief statement on his arrival at Addis Ababa airport after picking up the prize in Norway, where he studiously avoided media engagement.

"I want to thank Ethiopians and Eritreans. I want to especially thank President Isaias Afwerki, and I hope we will meet soon," he said.

Abiy won the Nobel in large part for reaching out to Isaias last year, creating momentum for a deal that formally ended a two-decade stalemate stemming from the two countries' 1998-2000 border war.

But during the award ceremony in Oslo on Tuesday, Norwegian Nobel Committee chairwoman Berit Reiss-Anderson noted that the peace process "seems to be at a standstill", with border crossings closed and little apparent progress on border demarcation efforts.

She said the committee hoped the Nobel would "spur the parties to further implementation of the peace treaties".

Abiy and Isaias last met in Asmara in July.

Hundreds of people waving Ethiopian flags gathered at the airport to welcome Abiy's plane, including young men from his Oromo ethnic group -- Ethiopia's largest -- who arrived on horseback.

Vendors sold T-shirts bearing Abiy's face and the words "Africa's Pride", and two brass bands played on the roadside as Abiy's convoy rolled into the city.

Crowds gathered in Addis Ababa to welcome Abiy on his return from Nobel Peace Prize ceremony. By EDUARDO SOTERAS (AFP)

Fekadu Shiferaw Ayele, who works at a nearby hotel, said he hoped the Nobel would help Abiy as he confronts domestic challenges like rising ethnic violence and economic woes ahead of elections planned for next year.

"We are facing problems in many parts of the country, but this can help bring us unity," he said.

One of the men on horseback, Issa Musafa Issa, said officials in the Oromia region organised the welcome ceremony, and that he woke up before dawn to ride some 20 kilometres (12 miles) to reach the capital.

"The peace prize is not just for him, it's for us," Issa said, adding that he expected officials to give him 500 Ethiopian birr (around $15) for showing up.

This week's Nobel festivities were tainted somewhat by Abiy's refusal to field questions from the media.

Abiy's entourage attributed this in part to his "humble disposition", something the 43-year-old leader played up in his comments Thursday.

"For someone who was born in Beshasha, to represent Ethiopia and Eritrea, I do not have the personality which is worthy to stand in this great place," he said, referring to his home village.

Alemudale Gemeda, who joined the crowd to greet Abiy, said the prime minister's reluctance to speak to the press wasn't a problem.

"He doesn't need to waste his time with simple things. We are in a big transformation in economics and everything, so he needs to focus on this," he said.