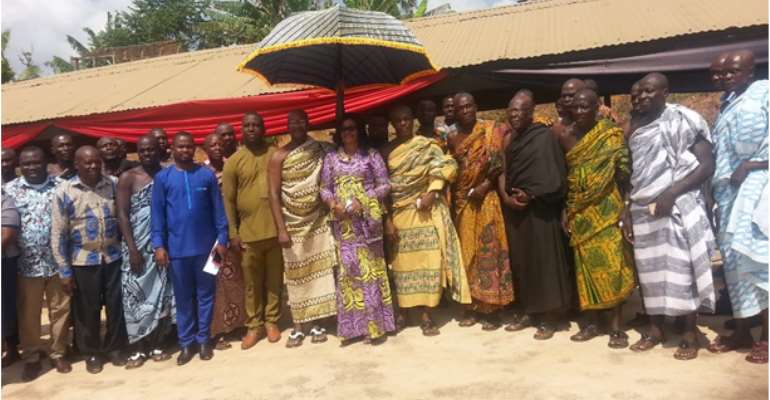 Mrs. Victoria Adu, the Birim Central Municipal Chief Executive (MCE) has cut a sod for the construction of CHPS Compound worth GH¢385, 922.65 in Oda Nkwanta.

.At a durbar before the sod-cutting ceremony, Mrs. Adu thanked Nananom and other residents in Oda Nkwanta for their support and warm reception.

She indicated that government under the leadership of His Excellency Nana Addo Dankwa Akufo-Addo, the President of the Republic wants health care delivery to be closer to the citizens.

She further explained that it was against this background that the Birim Central Municipal Assembly has earmarked Oda Nkwanta for the ultra-modern CHPS Compound to serve the people in its catchment areas.

Mrs. Adu said the government could not realize its dream without funds and for that reason, charged all taxpayers to honour their tax obligations to ensure the government gets funds to execute more projects.

Advising the parents, Mrs. Adu indicated that education is a key to success and for that matter, the government has introduced free SHS policy aimed to afford the opportunity for all citizens to acquire quality and affordable education and however urged them to take advantage of the policy and send their children to school.

The MCE pleaded with the residents not to allow themselves to be divided by politics but rather come together as one people with common destiny to use communal labour as and when necessary to clean their environment so as to prevent them from getting endemic and pandemic diseases.

She said the project which is being funded by the Assembly is expected to be completed by the contractor, Franbis Engineering Services within six-months and after completion will serve the people in the community and its environs.

Nana Dwamena Akenteng II, the Omanhene of Oda Nkwanta who chaired the programme pledged to support the contractor to ensure the project is completed on time to address the medical issues confronting the people in the community and its environs.

In another development, Mrs. Adu, also paid a courtesy call on Nananom and other residents at Akyem Gyadam after which she inspected an ongoing Assembly Project on the rehabilitation of the teachers’ bungalow estimated to cost GH¢140, 254. 08 awarded to K.S Construction and Business Complex.