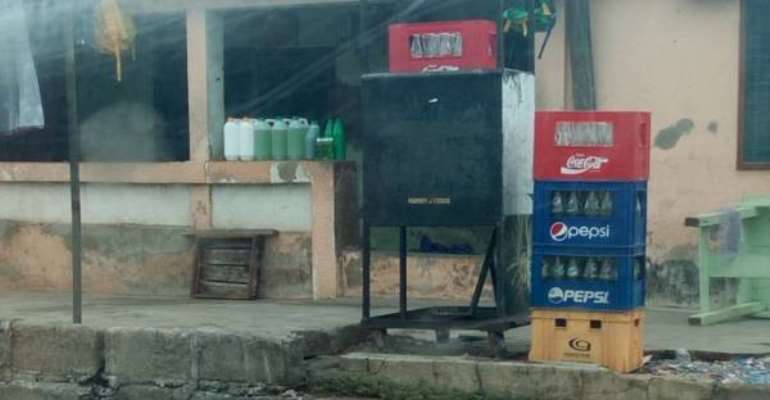 “Christmas is here with us. Join the celebration…rejoice, rejoice..rejoice…” is what my daughter comes home singing. Her song brings back beautiful memories of Christmas in late-80s to the mid-90s: Christmas in Zambrama Line.

If there was any vacation I looked forward to, it was the Christmas vacation. This is because it was the only vacation; we didn't have to go for vacation classes. The fun and the euphoria of Christmas at Zambrama Line was worth more than anything I could wish for. Oh yes, Christmas in the Zongo was lit. Even the marching song on Our Day (last day of school) was different. It says: “Christmas is approaching… but I never liked the ending…it is a shame for those who fail. We are going home for Christmas, why talk of failures, I always thought.

First, there is the harmattan breeze… it tells us that Christmas is in the air. So you see, we actually smelt Christmas. GBC (the only TV station at the time) never disappointed: you can be sure to watch Kukurantumi, I Told You So, Baby Thief, Matters of the Heart, Home Alone and Sister Act several times during the season so it wasn't surprising that almost every child knew the lyrics of the love song of Nico and Sakina From Matters of the heart.

Our hall will host several children from the neighbourhood to watch our black and white President television. In later years, we will upgrade to a 12 inch coloured Sanyo television and it brought with it an increased number of children who had boycotted their own parents' black and white televisions. The only condition for watching in the hall was taking your bath. Those who did not take their bath, watched through the window. You should see how well I flaunted my power as the bouncer to Papa's cinema.

We would also “time” that big balloon from Kweku Maame's Provision Shop with all of our “pocket money” and always get the small one and when Christmas was all over, that big balloon would still be the last balloon standing, robbery! Our version of Father Christmas (Santa Claus) did not give gifts: The kaakaamotobis (masquerades) solicited for money, and people joyfully gave; they did not grant children their wishes, they scared them and it was such fun! In their full regalia, the Kaakaamotobis entertained children and adults alike.

There were so many varieties of “tute” or knockout (firecrackers). The ones that sparked off flames, the tiny round ones that needed to be hit hard on a concrete floor to give a puff, and the very loud ones used by the older children and adults. The Christmas decoration was simple – treads hanging from one end of the room divider carrying on them all types of cards: birthday, success, speedy recovery, thank you and Christmas cards and those bouncing and fragile Christmas decorations hanged from the ceiling.

And later years, when my parents could afford, there was the disco lights that lasted only a Christmas season because the following year it would be too entangled and only a couple of lights would work. Christmas was not complete without the sight of people chasing chicken to be slaughtered. Every one joined in the chase, children, adult even passers-by and what joy fills the chasers when the fowl is eventually caught. And the catcher, oh the cheers you receive.

My Christmas dress, the only already-made dress I got in the year, was never a perfect fit; at least it needed to be little oversized so it can last as church dress for months and later downgraded to a house dress. My Christmas shoe was a little oversized too but that wasn't a problem at all: a little tissue pushed to the front and I was good to go… Oh let me not forget the paper hat and the plastic watch and plastic spectacles that did not even last the Christmas season. All items were kept in mummy's wardrobe and I would peep and admire them several times when no one was watching before their outdooring on Boxing Day.

We didn't go to Church on Christmas day because Papa believed the 24th Watchnight Mass covered Christmas Day; very much unlike the strict Catholic father he is. It was Christmas, and he even knew how much each of us would hate going to church. On Christmas day, a couple of church dresses were also downgraded to house clothes so we look “presentable”.

There were a variety of drinks: the squash for the children, the Fanta, Mirinda and the 7UP for the older children and adults, and there was enough Piccadilly biscuit. We received several visitors too. There were also the Adisas and the Rukayas close enough waiting for me to return their Salah (Id) favour. They will remind me of how generous they were in giving me supplies of pieces of meat throughout the Salah season. I will also be passing to them biscuits; drinks I could get from Daavi's (the name for every Ewe woman in the neigbourhood) kitchen knowing another Salah was around the corner.

The fattest fowls from mummy's hen coup were slaughtered by a Moslem neigbbour to allow our Moslem neighbours share in our meal. The rice and stew on Christmas day always tasted different and it was of course the best meal of the year. If you eat Christmas rice and stew from any home, you would say Jollof is over rated.

By 10am, food was ready. Mummy would bring out all her paris (pyrex) bowls, five-five bowls (stainless steel) and China bowls that have been on display in the room divider throughout the year.

I did not like the cooking part; I liked the errand part: sending Christmas food to the long list of neighbours, irrespective of religion, social class or ethnic group. Sharing was the spirit of Christmas. The bowls of food with accompanying drinks were placed into plastic basket covered with new napkins.

On some trips, you carried food for more than one neighbour and when there was more than one wife in a home, each was served her own food and drink and you dare not mix it up! You will get that look from mummy but not a spank; it was Christmas. We also equally received food and drinks from some of the few Christian neighbours around. No one goes hungry at Christmas! You could walk to any home and be sure you will be served with food and drink. Like Salah, there was so much to eat and drink during Christmas.

The walking was between showing off, managing an oversized shoe and the agonizing pain from wearing a new shoe but it was a walk to behold! A group of us, close friends and family of similar age as myself, would converge at our agreed home to start our Christmas shikpaa, all of us beautifully adored in our Christmas new reali (new release). You could easily spot siblings, because they would be in anko (similar dress/fabric). Hand in hand, we start our roaming spree. We would move from relative to relative and neighbour to neighbour to “greet” them.

We would be served with drinks, food, sweets and our parting gift was usually money. Usually, it was received by the oldest in the group and we shared our bounty at the end of the day. We would even have strangers offer us sweets and money for looking good. Some would ask us to entertain them with singing and dancing and we were so glad to do it because it was Christmas and strangers were not dangerous.

Our money was always given to mummy for safe keeping but it was never returned because we needed to refund all monies ever spent on us in order to get back our money. But somehow, we always gave every money to mummy. And the Christmas picture was always taken either in front of the Zibo residence because it was the most beautiful house in the neighborhood or in front of a plant holding a leaf or a flower, or in front of the room divider in the hall. We always retired to bed tired, too tired to even take a bath, and mummy spared us too, it was Christmas.

The period from 27th to the 29th was always spent in my village (a story to be told on another day) but we would be back by the 30th just in time to usher in the new year in Zambrama Line. I did not look forward to the watchnight mass at church as much as I did to the celebration back home at Zambrama Line. We came home to burning tyres on the streets, different sounds of knockout, loud music all over the place, all shops opened and the whole community fully awake.

Although, it was after midnight, it was always as though the night was starting. And as family tradition to mark new year, we would always go to bed after taking a cup of hot Bournvita drink and bread.

The older boys would always return later at dawn from parties or jams organized in main town Dansoman. Kitkat and Club 250 were among the usual destinations. We would hardly sleep, when Papa would wake us up to the first morning devotion for the year. I think the entire family except Papa slept through that morning devotion.

Every one dreaded the task of taking the reading How do you read when you are half asleep? Come and see disco reading! Sometimes, it was the giggling from other members of the family as a result of the poor nature of the reading that kept us awake. And no one leaves the house on new year day; it was Family Day, as Papa calls it.

Later in the day, we would have a family meeting where we recap the successes and failures of the past year and expectations for the new year. Later in the evening, my siblings and I would have a good laugh about who was awake, dozed off and even remembered anything said at the morning devotion, and the conclusion was always the same… we never hear anything from that morning devotion… and that will be the wrap for the Christmas break. Tell me Christmas in Zambrama Line wasn't lit.

Christmas today… We live in neighbourhoods where we hardly know the next neighbour. We hardly visit others or receive visitors during Christmas because most parents use the opportunity to rest from a rather tiring working year. But right there on your street, there may be a neighbour who can hardly find food to eat on Christmas Day. How about that cleaner from your workplace? We just need to look closer and we will find that one person we can cheer this Christmas.

To parents, in the midst of all the work, let us not forget to let our children have fun. We may not be able to give them our childhood type of fun, but can we can help them create beautiful and lasting memories of their childhood. We should also not forget the reason for Christmas… Christ is born! Christ is love! Receive Him! Merry Christmas!