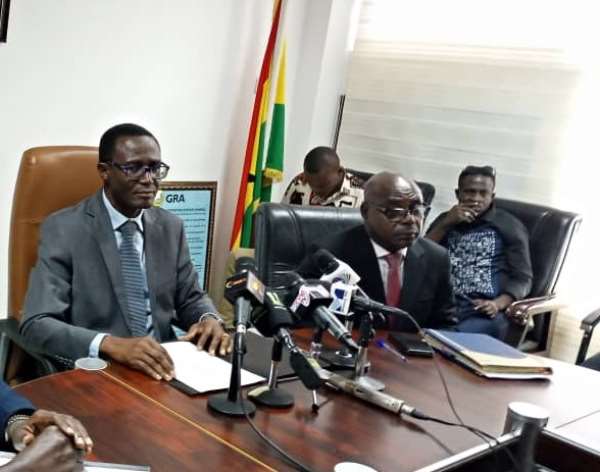 The Ghana Revenue Authority (GRA) has officially allayed the fears of the Ghanaian taxpayers over the recent fire outbreak that ravaged some offices of the authority at the Nkrumah Circle in Accra Sunday, December 1, 2019.

According to the Board and Management of GRA, though the 2nd floor of the building was completely ravaged by the fire leading loss of some important documents and information, the management had had access to all those information from their backup systems.

Addressing a Press Conference in Accra, the Commissioner-General of GRA, Mr. Ammishaddai Owusu Amoah exorcised the earlier rumours that some amount of money was lost as a result of the fire.

He assured the general public that, the GRA would come out publicly with detailed information on the cause of the fire and the number of items/documents lost to the fire, after the completion of investigations by the Ghana National Fire Service.

The Commissioner-General however, commended the media for their role in disseminating information to the customers of GRA in good time and for also allaying their fears.

According to him, to ensure the smooth running of their operations, staff from the affected officers had been redeployed to other GRA offices. The Authority has also put in place measures to help the affected staff in dealing with the loss suffered by offering them counselling and psychological support.

Meanwhile, all customers including the large taxpayers of the affected office are directed to transact business or make payments at the Kinbu sub-LTO, at GRA head office, Ministries, Keneshie MTO Dadeben road Osu MTO Mission street near Papaye down and etc.