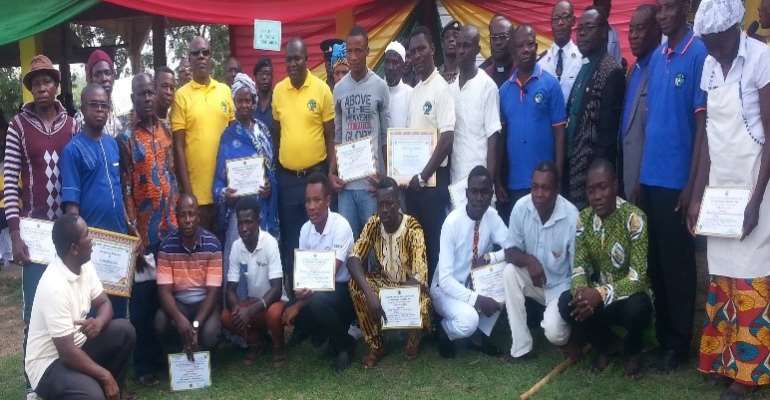 Awardees franked with DCE and MP

He emphasized that when a person has HIV / AIDS, he cannot work properly to cater for himself and his family members and eventually such situation has a cascading effect on the Ghanaian economy.

It is against this back drop that Mr. Incoom and the Assembly is intensifying the campaign on “know your HIV/ AIDS Status” by educating citizens in the Asene Manso Akroso District to humbly go out there to be diagnosed. He added that early detection of the disease can be properly managed by health practitioners.

Mr. Incoom made this statement when he addressed participants at the 35th Farmers’ Day Celebration at Akim Akroso in the Eastern Region.

Touching on the numerous interventions put in place by government to boost the agricultural sector, Mr. Incoom indicated tha the planting for food and jobs programme which was introduced in 2017 by government has supported farmers in many diverse ways and however call on all to assist government to achieve the success of the programme to ensure Ghana becomes self-sufficiency in food production.

On intervention programmes introduced to support the Agricultural sector by Assembly, DCE stressed that the Asene Manso Akroso District Assembly has taken steps to raise 36, 000 oil palm seedlings for free distribution to farmers and secured 600 hectares of land to be used for rubber plantation to augment the government’s flagship programmes to ensure more raw-materials are produced for the implementation of one-district, one-factory projects.

On the importance of planting for food and jobs, he stressed that the programme had created numerous jobs for both younger and older and hinted that Assembly through department of Agriculture received 300 NPK and Urea fertilizers and distributed to 204 farmers to be used for 60 hectares of farmlands while 60 bags of seed maize and 60 bags of seed rice were also distributed to another 141 farmers who cultivate rice and maize farming in the district.

In another development, Mr. Prosper Klu, the Asene Manso Akroso District Director of Agriculture defined farmers’ Day as a day sets aside by government to honor gallant farmers.

He said Agriculture sector in Ghana has seen significant improvement in terms of production, modernization, food security and employment and hinted that the sector’s potentials contribute to growth and development respectively.

Mr. Klu said one of the challenges hindering Agricultural sector was that, Ghana spends close to over 1.25 billion dollars to import rice and poultry products like “Akokor Fose” while the country has more arable lands which are good for cultivation of cash crops and call on government to provide credit loan facilities for farmers to enable them to cultivate more food crops to be used by Ghanaians and export the surpluses to the other European countries for sale.

Nana Kwabena Fori II, the Omanhene of Akim Akroso who chaired the programme urged government to provide incentive and pension schemes to support farmers across the length and breadth of the country to enable them proactively produce more food to support the country.

Mr. Evans Amoah was emerged as an overall best farmer in the District.