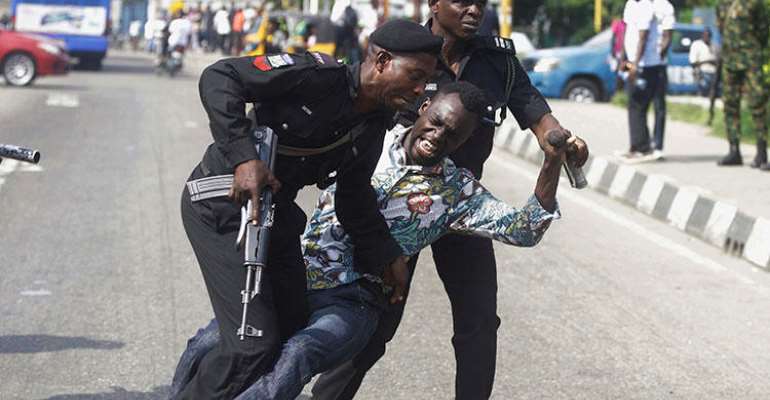 New York, December 10, 2019—Nigerian authorities should halt all efforts to intimidate journalists working with the U.S.-headquartered, Nigeria-focused Sahara Reporters news website and ensure they are permitted to continue working to report the news, the Committee to Protect Journalists said today.

Sahara Reporters staff told CPJ their Nigerian bank account was frozen without advance notice in October, significantly hindering their operations. The website was separately disabled twice due to allegations of copyright infringement, and staff report cyberattacks and increased surveillance outside their Lagos office, according to Sahara Reporters staff who spoke to CPJ.

The site conducts aggressive reporting on corruption, according to CPJ’s review of its reporting. Its founder, Omoyele Sowore, is in Department of State Services (DSS) custody after organizing August protests calling for improved governance, according to CPJ research and news reports. CPJ is unable to confirm a connection between Sowore’s arrest and his journalism, but continues to investigate the case.

Pierre told CPJ the bank said the account was subject to “a government hold” and “not able to be operated,” but would not elaborate. When CPJ requested comment by email, Ijeoma Nwachukwu, a relationship manager with Guaranty Trust Bank, declined to reveal details about specific accounts because of “duty of confidentiality.”

Staff in Lagos have repeatedly seen vehicles with tinted windows outside the outlet’s office with occupants wearing black clothes characteristic of DSS agents, Kojah said. Abiodun Sanusi, a reporter with Sahara Reporters, told CPJ by phone that he saw two men wearing black uniforms and caps in a van outside the office on November 5.

Pierre told CPJ that Sahara Reporters’ website has also been subject to cyberattacks and takedown requests. She described at least three incidents since August where exceptionally high traffic consistent with distributed denial of service (DDoS) attacks threatened to disable the website, though without success.

17 in relation to a copyright complaint under U.S. law, Pierre said. A U.S.-based company involved in hosting the website said that a Nigeria-based complainant had flagged a Sahara Reporters article for violating the U.S. Digital Millennium Copyright Act (DMCA), according to notifications reviewed by CPJ. The 1998 DMCA incentivizes intermediaries to remove or disable access to content subject to copyright complaints to avoid liability, according to CPJ reporting on Ecuador.

Pierre told CPJ that the notifications referenced a 2010 story on political corruption allegations that another website appeared to have republished with an earlier date. Though Sahara Reporters’ site was restored each time, the article was unavailable when CPJ attempted to view it in December; Pierre said they continue to challenge the complaint.

Several Sahara Reporters investigations have alleged senior Nigerian officials’ involvement in wrongdoing. One May example based on leaked audio recordings alleged that Godwin Emefiele, governor of Nigeria’s central bank, sought to cover up the theft of 500 billion Naira (US$1.38 billion) in public funds. Central bank spokesperson Isaac Okorafor told local media the audio was authentic but misleading, since no money was missing. Documents released during the prosecution of whistleblower George Uboh, who accused the banker of taking the money, suggest Emefiele asked Nigeria’s police chief to investigate Sahara Reporters’ source, according to the outlet’s July report.

CPJ called a number listed for Okorafor on December 9 but the person who answered did not respond to questions before the line disconnected; subsequent calls rang unanswered. CPJ’s calls to Frank Mba, spokesperson for the Nigerian police, also went unanswered.

DSS agents arrested Sahara Reporters founder Omoyele Sowore on August 3 after he planned nationwide protests under the hashtag #RevolutionNow; he is charged with treason, cybercrime, and money laundering, including for transfers allegedly made to Sahara Reporters’ Nigerian bank account, according to a U.S.-based legal team’s submission to the U.N. working group on arbitrary detention. Sowore has been jailed ever since, aside from one overnight release on bail in early December, according to Pierre and media reports.

CPJ has documented Nigerian security forces repeatedly attacking journalists, including those reporting on the August demonstrations or related protests against Sowore’s detention. Following the reelection of Nigerian President Muhammadu Buhari in February, journalists told CPJ they worried that his government would feel less restrained in curbing press freedom.