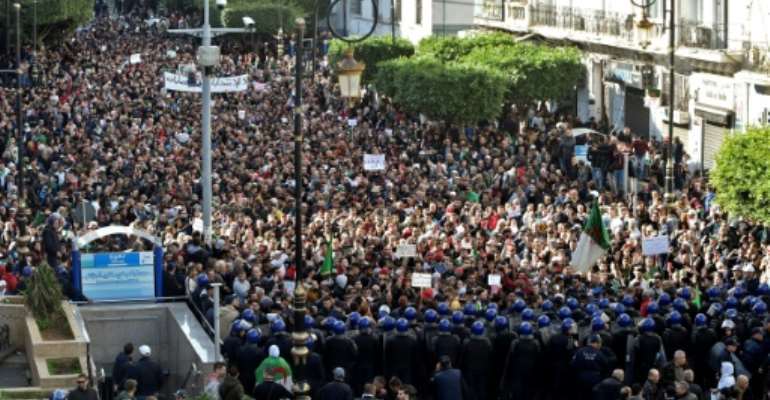 Algerian protesters have marched weekly since February and say sweeping reforms must be made before a presidential election on Thursday they see as a regime ploy to cling to power. By RYAD KRAMDI (AFP)

Thousands of Algerians demonstrated for a boycott on Wednesday on the eve of a widely unpopular presidential election.

Police in the capital Algiers used truncheons to hold back demonstrators near the central post office, the rallying point of the "Hirak" anti-government protest movement since February.

The movement forced the resignation of ageing president Abdelaziz Bouteflika in April, but has continued marching across the country each week to demand sweeping reforms ahead of elections.

Demonstrators brandishing red cards shouted "no vote" to an election they perceive as a regime ploy to cling to power.

The five approved candidates all either supported Bouteflika or participated in his government, including two as prime ministers.

"Today we spent the night outdoors," protesters chanted when police tried to block access to the post office.

Despite police making calls to disperse and a dozen arrests, protesters held their ground, an AFP journalist reported.

Protests have been illegal in Algiers since 2001 and until now police have only tolerated weekly Hirak protests on Fridays and student marches on Tuesdays.

Demonstrators also chanted slogans against powerful army chief Ahmed Gaid Salah, who has emerged as Algeria's de facto strongman since Bouteflika's resignation and is a champion of Thursday's election.

Algeria's powerful military has exercised power from the shadows since independence in 1962, and analysts say commanders are hoping to use the vote to install a "civilian facade".

Demonstrators opposed to the election also rallied in the provincial cities of Bouira and Constantine, according to social media.