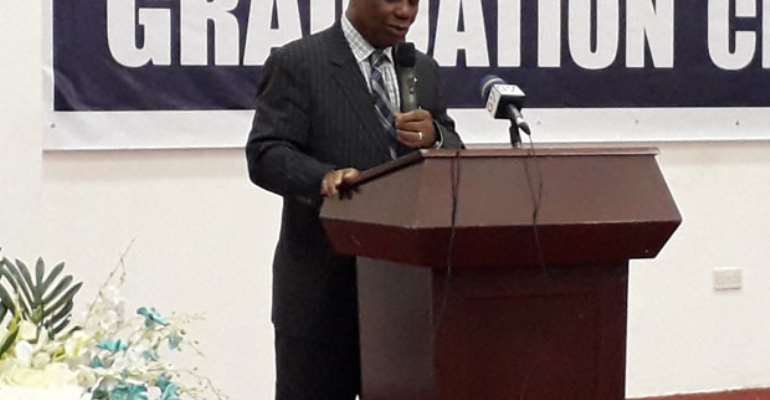 A Supreme Court Judge, Justice Jones Victor Doste, has advised Ghanaians to exhaust all alternatives of resolving disputes before considering court action which he said tends to deepen conflict among parties.

Sharing his over four decades of experience in the legal profession, he disclosed that the complex processes of litigation which culminate in prolonged proceedings bring about frustration among parties who are not even guaranteed favourable rulings at the end of proceedings.

“When that happens there is some bitterness among them and they resort to other forms of settlement on their own,” he said.

He gave the advice when he delivered a keynote address over the weekend at the 4th graduation ceremony of the Centre for Peace and Reconciliation (CPR) which was held under the theme, “Counsmed Approach-The future of Integrated Alternative Dispute and Conflict Resolution.”

The ceremony was climaxed with the presentation of certificates to 129 students who had offered foundation and advanced courses in CounsMed which is an Alternative Dispute Resolution (ADR) methodology made up of a hybrid of counselling and mediation.

The methodology is known to provide effective facilitation of dispute settlement by dealing with emotions, reasoning, wrong behavioural reflexes, wrong perceptions, among other variables.

Justice Dotse noted that most conflicts in Ghana had been as a result of an individual or groups wanting to change ground rules due to selfishness and greed as being played out in violence and disputes of land, chieftancy, religion and politics.

He, therefore, advocated that the skills to practise ADR, which he indicated had historically been the preferred one, though informal mechanism of resolving conflict among Ghanaians since time immemorial, should be nurtured by all professionals.

“Before the introduction of formal system of litigation, our forefathers had systems of adjudication,” he said.

He favoured the method of ADR in resolving conflicts due to the private nature of the adjudication process, more hearing time for aggrieved parties during the process and the drawing of solutions within a relatively shorter period based on the input and agreement of warring parties.

The Chief of the Defence Staff (CDS), Lt. Gen. Obed Boamah Akwa, reminded the security agencies of their “overarching mission of combating and making swift recovery of any act of terrorism or instability that may affect the peace of the country, especially in an outbreak of a conflict.”

“We must also have very constructive conversation about peace, enforcement mechanisms, reconciliation and peace building,” he said.