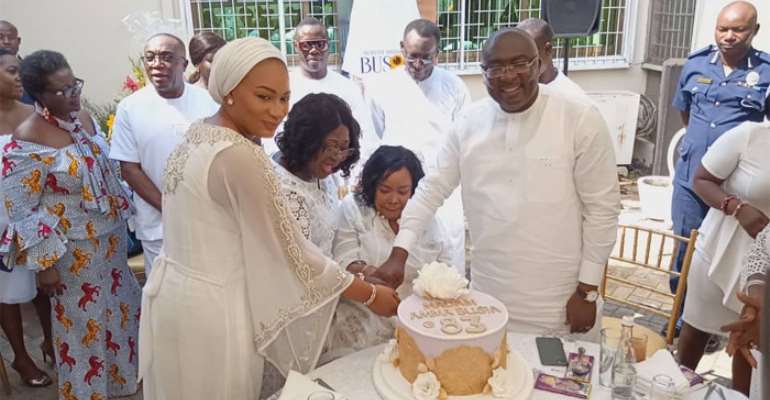 Dr. Bawumia and his wife, Madam Samira Bawumia and the Chief of Staff Frema Osei-Opare cut the birthday cake as Madam Amma Busia watches in admiration

Dressed in spotless white as did his spouse, Madam Samira Bawumia, and the Chief of Staff, Madam Frema Opare-Osei, during the social function, he described his guest as a woman who brooks no nonsense and would say it as it is no matter whose ox is gored. 'She would tell you straight in the face' he said.

He held his audience spellbound as his tributes flowed so freely one could bet he had rehearsed the extempore session of the plaudits.

He told his audience that at the age of seven he told his father he would like to emulate Dr. K.A. Busia, the celebrant's elder brother and a former Prime Minister of Ghana, when he grows old. Today as fate would have it he is Vice President of the Republic Of Ghana. He did not forget to tell his audience how he used to read Prof Busia's book and the mentorship he has received from Madam Amma Busia.

Dr. Bawumia recalled how Madam Amma Busia's steadfastness and commitment to the New Patriotic Party (NPP) held the party together. 'We cherish you, we appreciate you on your 83rd birthday' he ended his beautiful tribute to the admiration of his audience.

Although a working day, yesterday's activity drew many admirers to her residence among them the Most Rev Asante Antwi, Madam Emma Mitchel, a former Minister under the NDC regime and Council Of State member under the Kufuor government, Madam Joyce Aryee and Faustina Nelson, a female politician among others.

A retired banker, Madam Sussie Quartey, who was part of the guests of Madam Amma Busia said 'she is such a lovely woman whose love for God and country knows no bounds. May God continue to be with her.'

The Tema Youth Choir was in attendance and to whose music Dr. Bawumia joined others to dance to.