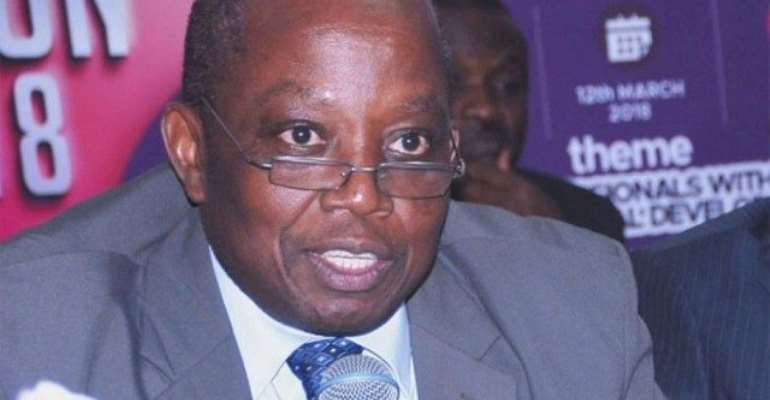 Mr Domelevo’s recent recognition was being challenged by Gabby Asare Otchere- Darko, a close confidante and cousin to President Akufo-Addo.

Mr Domelevo was on Sunday awarded the ‘Integrity Personality of the Year’ at the maiden Integrity awards ceremony o rganised by the Ghana Integrity Initiative (GII) and the Ghana Arm of Transparency International.

The event was to commemorate the UN International Anti-Corruption Day.

Mr Domelevo, who was recognized alongside four other anti-graft campaigners; Manasseh Azure Awuni, David Boateng Asante, Ato Ulzen-Appiah and Edward Sowah Adjetey had a citation read to acknowledge his achievements.

He was praised for taking a fearless stance to promote transparency, integrity and accountability, as well as breaking the culture of impunity in the Public Service.

The citation further indicated that “between 2017 and 2018, the Audit Service, under your leadership, issued 112 surcharge certificates and recovered a total of ¢67,355,66.12 into government chest. This achievement has inspired audit institutions in other African countries to pass similar legislation on disallowance and surcharges and the GII is proud to declare that you are the Integrity Personality of the Year 2019.”

While congratulating the Auditor General on his Facebook page, Mr Otchere-Darko said the reason for receiving the award sets the bar too low in the fight against corruption.

According to him, i f saving the nation ‘GH¢60m’ qualifies a public servant or a patriot to win the ‘Integrity Personality of the Year’, then there are several ministers, CEOs and media houses who have done much more and saved the nation more money.

But commenting under the post, the three emphasised that the Auditor General had done much more than stated by the citation and therefore deserved the award.

Arguing their point, Mr Azure stated that the award was to recognize a person’s contribution to the fight against corruption and not necessarily the amount of money involved.

On their part, Mr Anyenini and Ace Ankomah provided documents to prove that Daniel Domevelo had saved the country money in excess of 5 billion Ghana cedis in a single audit as against the 60 million Ghana cedis quoted by the organizers of the awards ceremony.

They urged Mr Otchere-Darko to be diligent in his research before stating figures and facts on social media.