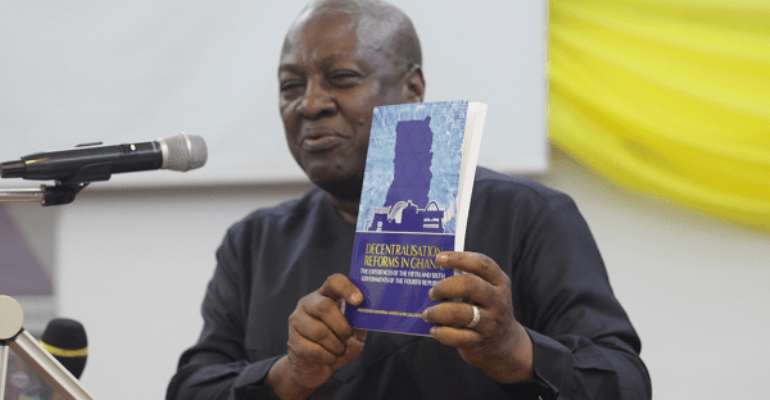 Former President John Dramani Mahama has challenged the withdrawal of the bill to amend Article 243 (1) of the 1992 Constitution, which requires the President to appoint Municipal, Metropolitan and District Chief Executives (MMDCEs).

He said the cancellation of the referendum to amend Article 55 (3) of the 1992 Constitution should not have resulted in the withdrawal of the bill to amend Article 243 (1) which was in “the bosom of Parliament”.

The bill to amend Article 243 (1) was already at the second reading stage in Parliament before it was withdrawn.

Book launch
Mr Mahama was speaking at the launch of a book on decentralisation reforms at the British Council Hall in Accra last Monday.

The book attracted former ministers of state under the National Democratic Congress (NDC), members of the minority caucus in Parliament and other high-ranking members of the NDC.

Also in attendance were students, lecturers and administrators in the country.

Electing MMDCEs
Mr Mahama said Ghanaians were craving the opportunity to elect MMDCEs to hold them accountable according to their performance.

“It is clear that the people of Ghana want their MMDCEs to be accountable to them and they are not satisfied that the MMDCEs are appointed by the President.

“What we should have done was to have left Article 243 (1) to be decided by Parliament. I think that would have been the way to go but not to withdraw both bills,” he said.

Former President Mahama, however, noted that Ghanaians were proud of the decentralisation process and desired that it be implemented effectively to ensure a thriving democracy in the country.

“We always take pride in our decentralisation and it was always a pride for us to see other people come from their countries to learn about our district assembly process,” he said.

Book details
In a statement read on his behalf, the Managing Director of Winmat Publishers Limited, Mr Eddie Addo, paid glowing tribute to the two authors for their in-depth understanding of the decentralisation process and their resolve to share that knowledge with the world.

The Chairperson for the event, Prof. Jane Naana Opoku Agyemang, in her remarks also congratulated the authors for their scholarship and implored other experienced people, especially women, to write books.

“Even if it’s just a page, I urge all of you here to write and I will gladly do the editing,” she said.

Embarrasing Bossman Doesn't Fit To Be At The EC - Ahafo Com...
50 minutes ago