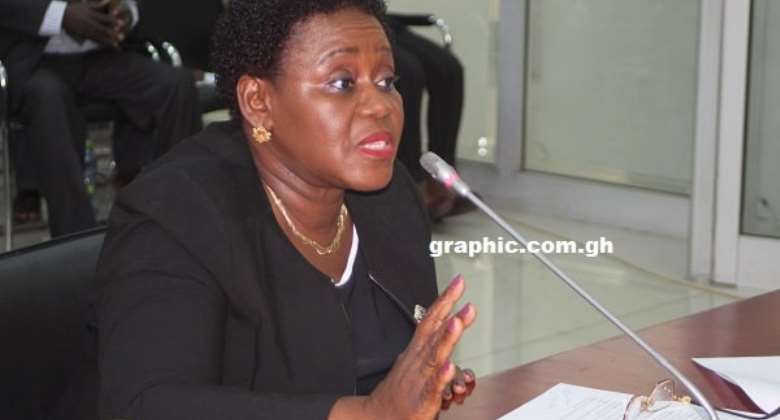 Justice Gertrude Torkornoo, a nominee for the Supreme Court, taking an oath at the Appointments Committee of Parliament in Accra.

Mrs Justice Gertrude Torkornoo, one of President Nana Addo Dankwa Akufo-Addo’s three nominees for the Supreme Court, has stated that it will be disastrous to cap the number of judges at the Supreme Court.

She said the Constitution had given the Supreme Court a broad scope and there was the need to put as many judges as possible there to do the work.

When she appeared before the Appointments Committee of Parliament on Tuesday, Mrs Justice Torkornoo opined that the Supreme Court was the highest court of the land and that it was the only court that could interpret the Constitution, with the unique jurisdiction of high-profile cases, such as treason.

Land registration
She also called for transparency in property registration in the country.

She said no obligation had been placed on the Lands Commission to check whether a land it was registering had already been registered as a practice.

The last of the three female Court of Appeal judges nominated to the Supreme Court to appear before the committee, Mrs Justice Torkornoo said there was the need for a clean-up of the issue of who owned what property in the country.

Court processes
The Court of Appeal justice said it was so frustrating to see litigants chasing their properties, which at times took forever to conclude, with people sometimes regretting starting the process, adding that the problem of who regulated assets in the country had festered and become more complicated to deal with.

She also expressed concern over the issue of summons to people to appear before court, which was one of the challenges facing the courts now.

She explained that it was very difficult to locate people to summon them to court and that had been the reason for the delays of certain cases before the courts.

Background
Justice Torkornoo, Justice Mariama Owusu and Justice Avril Lovelace-Johnson, who appeared before the committee last Monday, were nominated by President Akufo-Addo last month to replace the Chief Justice, Justice Sophia Akuffo, who is due for retirement by the close of the year, and Justice Vida Akoto Bamfo and Justice Sophia Adinyira, who have already retired.

Corruption
Responding to a question on corruption posed by the Member of Parliament (MP) for Asokwa in the Ashanti Region, Ms Patricia Appiagyei, Justice Torkornoo called for a more robust national conversation on the issue.

The MP for Asokwa had observed that there appeared to be the smuggling into Ghanaian values practices considered alien, and cited the example that in certain jurisdictions, giving a tip after a service was permissible, while others prohibited it.

While agreeing with the MP on the alien practices, the nominee indicated that issues of corruption in the country had been loosely handled and needed to be properly homed in to stir a national cause.

“I really share this view. I think that because of the way our cultural practices are, we have to have a more robust conversation on what is corruption, especially when you take out the criminal part,” Justice Torkornoo said.

Ethical codes
She said there was a part defined under the ethical codes of various professional bodies.

“We need to think through these and respond to them actively, else we are allowing the conversation to float around too much without coming to grips with it, and I don’t think it’s too healthy for all of us,” she said.

She had earlier agreed with the MP for North Tongu, Mr Samuel Okudzeto Ablakwa, that the most recent Afrobarometer survey on Ghanaians’ perception of corruption in the Judiciary was not good at all and required urgent attention.

Justice Torkornoo also responded to another question on gifts and their tendency to corrupt or be misconstrued as bribe by the Minority Leader and MP for Tamale South, Mr Haruna Iddrisu.

The Supreme Court nominee said given the nature of their work, members of the Judiciary should refrain from accepting gifts altogether, aside from, perhaps, gifts from one’s own children or immediate family members.

“Perhaps the Commission on Human Rights and Administrative Justice (CHRAJ) should help every institution to do that assessment and formulate that because of the structure of its work.

“I think that you cannot put judges in the same context as politicians; they are different people and have different functions and so if we deliberately think about every context and formulate codes for the context, we will be doing ourselves a lot of good,” Justice Torkornoo said.

Training of lawyers
On the training of lawyers in the country, she indicated that there was the need to separate the profession into solicitors and barristers because not everybody who completed the Law School was interested in practising.

She said too much attention was focused on the classroom work and called on all stakeholders to stop the blame game and find a lasting solution to the problem.

About her
Justice Torkornoo was born on September 11, 1962 and had her secondary education in Ghana. She attended the University of Ghana and the Ghana School of Law.

She has two post-graduate law qualifications, one of which is in Intellectual Property.

She has been on the Bench since 2004 and is married with four daughters and two grandsons.