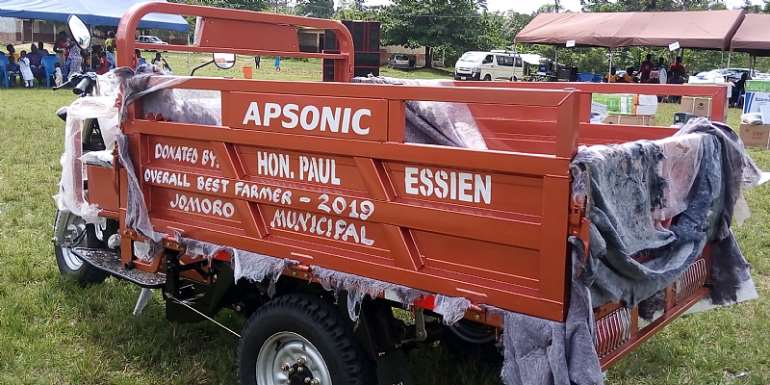 The Member of Parliament (MP) for Jomoro Constituency in Western Region, Mr. Paul Essien has donated a tricycle popularly known as "Aboboyaa" to Mr. Kwame Seidu, the 2019 Overall Best Farmer in Jomoro Municipality.

The donation was carried out following a pledge the MP made during the 2018 Farmers' Day celebration.

This year's celebration was held at New Ankasa, under the theme, "Enhancing Small Scale Agriculture towards Agribusiness Development".

At the end of the day, Twenty-two (22) gallant farmers were awarded and in returned, received various farm inputs, cash amounts, electronic gadgets as prizes.

Mr. Kwame Seidu, 52-years-old, from New Ankasa, apart from receiving the tricycle (Aboboyaa), was presented with a certificate, a table top fridge, a standing fun, a spraying machine, a piece of cloth, a wall clock, a wellington boot and eight cutlasses.

Making presentation of the tricycle to the best farmer, the MP who is also the Deputy Minister for Chieftaincy and Religious Affairs, applauded him (the Overall Best Farmer) for working hard to be crowned this year as the ultimate best farmer for the year under review.

He urged the awardee to continue to work hard to produce more agricultural outputs to support the municipality and Ghana as a whole.

The MP pledged his total commitment to support him and other farmers.

He, therefore seized the excited atmosphere to announce that he would buy a brand new vehicle for the winner of 2020 Overall Municipal Best Farmer if God willing.

"As I promised to buy a tricycle for this year's Overall Best Farmer, and I have done it, so we have to move from tricycle to a vehicle, so I am using this platform to let the whole Jomoro residents know that if God willing, next year, I will buy a brand new vehicle for the Overall Best Farmer", he promised.

He also took the opportunity to promise to build a Cocoa Depot for the municipality to improve transportation of cocoa beans from the area to Ellembelle District for sale.

Mr. Essien hailed President Akufo-Addo for putting up so many agricultural programmes to support farmers.

He touted the implementation of Planting for Food and Jobs, Planting for Export and Rural Development programme, cocoa pruning, cocoa hand pollination rearing for food and jobs among others.

"For the first time in the history of Ghana, the country did not import maize into the country", the MP stated.

He assured the cocoa farmers who gathered at the event that next year in October, Government would increase the price of cocoa.

The lawmaker appealed to Ghanaian youth to involve themselves in agricultural activities especially farming.

He said the youth should see agriculture as a prestigious sector that could assist in eradicating poverty.

On his part, the Overall Best Farmer, Mr. Kwame Seidu thanked the Member of Parliament for the area, Mr. Paul Essien for the kind gesture.

He said the tricycle would go a long way to help him in so many ways, adding that he was not expecting such a prestigious award this year, and the subsequent rewards following up.

He promised to work harder to produce more agricultural products and engage more unemployed youth in these activities.

He, seized the opportunity to appeal to Government to continue to support farmers in the country