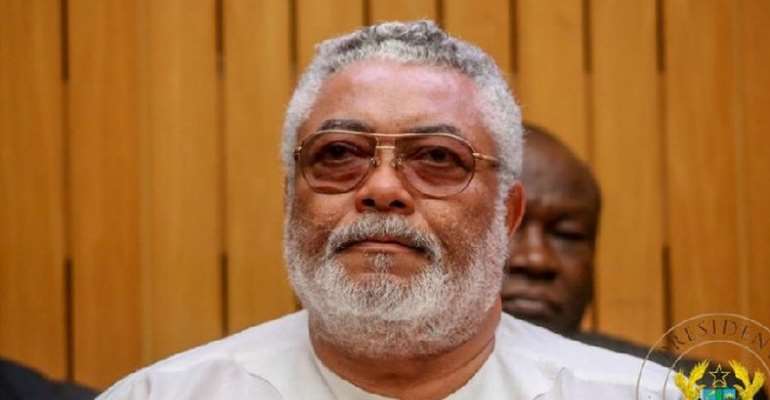 I have read bit and pieces of the news article culled from Boakye Gyan's interview with Adakabre Frimpong Manso on Neat FM published on ghanaweb.

I couldn’t help but shrug my shoulders in utter disbelief when bare lies and contradictions came jumping at me from his spiteful interview.

Boakye Gyan stated in his interview that, “Rawlings killed and drowned Flt.-Lt Kojo Lee in the ocean." I find Boakye Gyan’s hallucinatory squawk to be another futile attempt to discredit chairman Rawlings.

Was I surprised by the Boakye Gyan’s lack of grasp on Ghana’s political developments? Absolutely, not. In democratic Ghanaian politics, it is not unusual to see, and read, off-centered accounts from so-called actors who exploit the gullibility of the unsuspecting public.

First of all, it is a bloody lie that Rawlings murdered Flt.-Lt Kojo Lee. Let the good people of Ghana take this trash talk with a pinch of salt. Rawlings has no hand in Flt.-Lt Kojo Lee's death and this is a public knowledge.

If a soldier wants to kill another, why hang stones on him?

In any case, was Flt.-Lt. Kojo Lee not charged with murdering a civilian, tried by the George Agyekum Public Tribunal in Accra, sentenced to death, and shot at the firing squad at the Kpeshie military range?

When again did Rawlings do to him what Boakye Gyan is alleging?

What an interesting supposition from a deluded mind, for lack of a better word.

Boakye Gyan a vile, evil, malicious, and vicious character. I want to believe that his memories are fast fading or he's suffering from dementia. As a matter of fact, Flt Lt Kojo Lee was a very controversial personality terrorizing his own people around La and trade fair site area over a piece of land which he refers to as "African Lake". He killed a lot of people over that piece of land. He was tried in court and sentence to death.

Boakye Gyan's intemperate behaviour and shenanigans, untypical of an older man is happening simply because the wrong perceptions that he rescued chairman Rawlings from detention has been finally corrected. He's left with nothing to brag with, and has resorted to naked lies as a respite.

Indeed, this man played no role in the actual events of June 4th 1979.

He was fished-out of his girlfriend’s quarters by a detachment after the coup and he has Chairman Rawlings to thank for making him a member of the AFRC.

I don’t want to sound condescending; however, I am amazed by the shallowness of the Boakye Gyan in not getting his facts in order. This man remains one of the first traitors of the June 4 Revolution. He sided with the Limann administration, revealing secrets to them and ended up taking hundred thousand dollars from them against the tenets of the revolution. As if that wasn't enough, he was in cohorts with the Limann' administration while overseas.

All the members of the AFRC decided not to accept any such offers but Boakye Gyan and his likes pocketed the money against the wishes of the AFRC leaders.

Boakye Gyan lacks principles and ought not to be taken serious. This is the same man who loudly proclaimed that the NDC is a cult party founded on no ideology but when it serves his interest, he joined the NDC and even contested parliamentary elections on the party's ticket.

Where lies his principles?
In the preceding months to December 2020 general elections, we are seeing a persistent onslaught by certain nomadic minds in the NDC to discredit Chairman Rawlings and render him ineffective. It is all an attempt to take over the part but we the Rawlings adherents are serving a notice to these charlatans to watch it.

Boakye Gyan is just one of those storytellers who lack the meta-analysis of history, yet play historians for the sake of parochial and attrition politics.