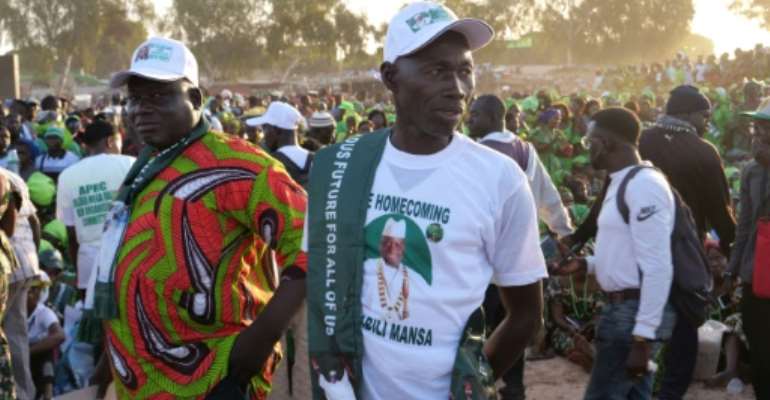 Supporters of Yahya Jammeh rallied last month as the former Gambian leader is accused of atrocities at truth and reconciliation hearings. By ROMAIN CHANSON (AFP)

Gambians have closely watched as scores of witnesses have accused ex-president Yahya Jammeh of atrocities, in hearings that have done little to deter his diehard supporters.

The former autocrat ruled the tiny West African state for 22 years before he fled in January 2017 after losing a presidential election to Adama Barrow, a relative unknown.

Some 190 witnesses have appeared before the Truth, Reconciliation and Reparations Commission (TRRC) set up to investigate abuses, in a process which began in January.

"We had blind loyalty for Yahya Jammeh," Amadou Badjie said at hearings last summer, describing how he had murdered two US-Gambian businessmen suspected of planning a coup.

Known as the "Junglers", former members of the ex-president's personal death squad have accused Jammeh of ordering a string of other murders.

The ultra-loyal paramilitary unit executed some 50 African migrants -- who they mistook for rebels -- rounding them up on a beach as they were trying to make their way to Europe.

The TRRC hearings are due to last two years in total, but it is still unclear whether they will lead to prosecutions.

He added that the TRRC will write a report after the proceedings end next year, when it is assumed it will request Jammeh's extradition from his refuge of Equatorial Guinea.

There is no lack of harrowing testimony.

In October, a former Gambian beauty queen said Jammeh raped her after she refused to marry him.

And from mid-November until Thursday, the hearings heard evidence about a mass witch hunt in 2009.

Forty-four witnesses, according to an AFP journalist, testified to kidnappings by witch hunters hired by Jammeh.

The victims were forced to drink strange concoctions.

'I told my captors that I will not drink the concoction, but they threatened to kill me if I refused," Adama Gassama said last week.

She said her husband was beaten mercilessly until he drank the liquid, and died a year after being released.

Many witnesses said they developed severe health problems after drinking the brew.

AFP was unable to independently verify the claims.

Amnesty International said that as many as 1,000 people were snatched from their villages by the witch hunters in 2009.

The motivation behind the episode is unclear. However, Jammeh is allegedly highly superstitious, and believed that witches killed his aunt.

TRRC hearings next year are still to examine some of the most notorious aspects of Jammeh's regime, such as allegedly forcing AIDS patients to undergo a herbal treatment invented by the president.

The former president retains support in the country of around two million people despite the grisly testimony, however.

'The TRRC is a witch hunt," said Yankuba Colley, a member of the former ruling party. "This will not bring healing and reconciliation in the country."

"The lead counsel... does not want witnesses to say anything apart from Jammeh is responsible for the crimes," he said.

There have been numerous calls for Jammeh to be returned to The Gambia for prosecution, while others are seeking his active return to politics.

"He is the only president who can develop the country," said Emilie, who attended the rally.

APRC activist Yankuba Kujabi said the size of the crowd at the rally "should show them that still now people love the former president".

The calls come at a delicate time for current President Barrow, who is suffering political blowback for his decision to serve a five-year term after initially promising to leave after three years.

Jammeh has hardly been heard from since fleeing to Equatorial Guinea in 2017.

A recording between him and APRC members, which leaked last year, suggests he is still in touch with his party.

Barrow's cabinet told AFP that Jammeh cannot run for president. "The least that could happen is to return as a private citizen but not as president," an official said.

"He has the right to come back and he will come back, inshallah (God willing)," Jatta told AFP.

Don't succumb to pressure to support LGBTQI agenda – GMM to ...
10 minutes ago