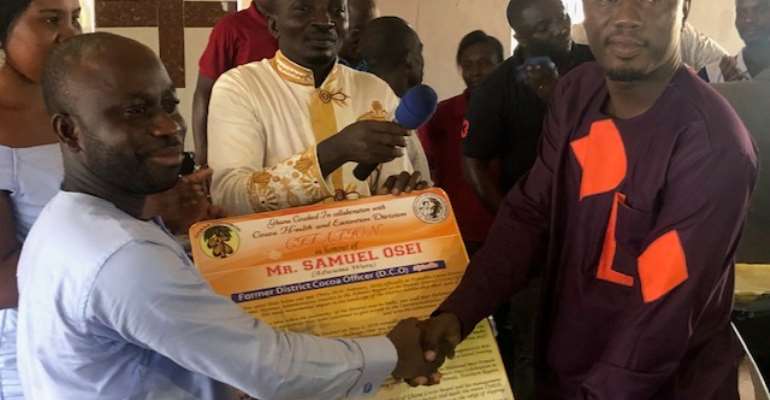 Tears of joy went down the cheeks of the many farmers that thronged the Nyinahin Presbyterian Church on Tuesday 10-12-19, to bid farewell to Mr. Samuel Osei from the district office of the Cocoa Health and Extension Division (CHED) to Dunkwa-on-Offin.

The program which was organized by the District chief farmer Opanin Yaw Bronya and his lieutenants brought cocoa farmers near and afar to pay heartwarming tribute to Mr. Samuel Osei.

In his speech, Opanin Bronya was full of praise to the CHED Officer for turning the fortunes of the Cocoa farmers in Atwima of his short stint in the district. “Mr. Osei, though you are out of sight, you shall be perpetually etched on the history plates of our hearts”, the chief farmer stated.

On a citation given to him by his successor and the CHED staff, it was noted, Mr. Osei was the architect of the Nyinahin district office as his influence, coupled with diligence and integrity sustained the workings of the CHED division of Cocobod within the district. With a short stay in office at the district, the indefatigable Osei made a name unparalleled in the annals of CHED, hence the moniker ‘Adwumawura’.

During his days at Mponua, many farmers enjoyed the fruit of their labour as many were also accorded National awards, and one of such is Madam Akua Brenya who won the Best Enterprising Female Cocoa Farmer in Ghana in 2018. Also, his initiative of forming cooperative and associations has yielded positive results as the number has increased to 360 within the district.

On his part, Mr. Samuel thanked the farmers for their kind gesture. “Words alone cannot explain how to appreciate this novelty. I know I am gone out of Mponua, but posterity will judge my cause”, he posited. ‘Adwumawura’ urged the farmers to work in closeness with the CHED office for advice and stick to good farming practice to increase their yield.

Also, he encouraged the farmers to form Associations and cooperatives for effective management and also a sure way of farming business for common good bargaining power. “With grit and grind we can get National Best Cocoa Farmer from Atwima Mponua”, he ended.

Hon. Joseph Osei Hamlet, who was at the program in the stead of Honorable William Darko had this to say: “Atwima Mponua Salutes you for helping to write its name in the record books of Cocobod. The DCE, Chief Farmers, and all farmers shall ever be grateful to tour cause in our district”, he stated.