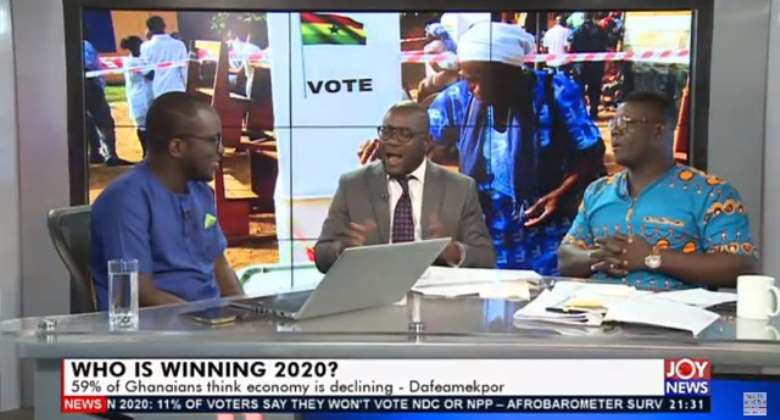 Member of Parliament (MP) for South Dayi, is optimistic the National Democratic Congress (NDC) will win the 2020 general election considering the analysis and results produced by the Afrobarometer survey on “Who is Winning 2020?”

Rockson-Nelson Dafeamekpor on PM Express on Tuesday indicated the ruling government’s major flagship programmes, including Free Senior High School, One village-One dam (1V1D), One district- One factory(1D1F), Planting for Food and Jobs, NABCO are all on the decline according to the study.

“This tells a story and the story is that the people are telling you that you are losing grip of governance.

“You used to be at a certain pedestal and you are now on a downward trend. It is momentum and the government will not be able to recover from it in less than 12 months,” he said.

A latest Afrobarometer survey released revealed that neither the governing NPP nor the NDC would secure a first-round victory should general elections be held today.

According to the survey, 11% of Ghanaians say they will not vote in the upcoming elections, whereas 19% refused to answer and 12% were indecisive yet.

This is a 6%, 6%, and 3% increase respectively from a similar survey conducted in 2017 by the Pan-African research network.

Reacting to the latest findings, Mr Dafeamekpor saw this as a plus for the NDC to capitalize on to obtain power.

“If I am in opposition and 19% of the people cannot say they will vote for the ruling government to continue, then that is in my favour. It means that is the segment of the people I can reach out to, because government has disappointed them,” the legislator stressed.

MP for Sekondi, Andrew Egyapa Mercer, speaking on the show, described the study as “food for thought” to help parties involved know their stance to stratergise for the future.

“This is a guide but it is not conclusive of the outcome of the 2020 general election. So there is every opportunity available to us to go out there and market ourselves properly.

“So it is interesting, how my ‘friends’ are struggling to make the Afrobarometer survey a referendum of the Akufo-Addo government. Obviously it is not,” he argued.

The NPP MP further added Ghanaians had a lot of expectation when President Akufo-Addo came to power but although all had not been met, he assured the citizenry, the government is on the right track in addressing their problems.

“We know that if we communicate better and go out there explain the financial challenges that we’ve had and the economic achievement that we have chalked and I am confident that we will win the election,” Mr Mercer stated.

Fighting your husband's side chicks is wrong; you could even...
55 minutes ago