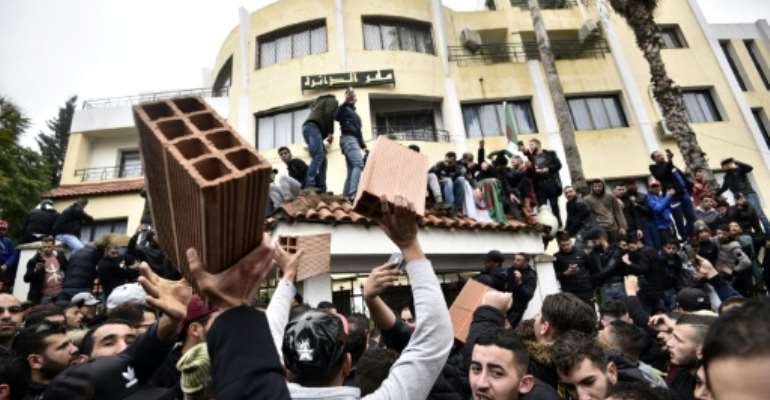 The brick has become the symbol of the anti-vote campaign in Algeria's Kabylie heartland of the Berber community. By RYAD KRAMDI (AFP)

In Algeria's disaffected Kabylie region, the brick has become the symbol of the anti-vote campaign ahead of unpopular presidential elections set for Thursday.

Protesters have even bricked up the entrances to local government offices to prevent the distribution of election material in Tizi-Ouzou, a key city in the region home to much of the North African country's Berber minority.

Walls where election posters would ordinarily appear are instead daubed with calls for a general strike.

"The strike is a show of force against the election -- we want zero voting here," said Amar Benchikoune, 38, outside his shuttered store. Since Sunday, pharmacies are the only shops to open in the city.

Ethnic Berbers, who mostly live in the mountainous Kabylie region, make up 10 million of Algeria's 42 million population but have long been marginalised by a state founded on Arab nationalism.

Online, people determined to thwart the vote have changed their profile pictures to a brick with the inscription "ballot".

"It's our way of showing our total rejection of the vote," said Ouerdia, a 55-year-old retiree.

For Mokrane, 29, "they want to organise the vote on the sly but we won't let them do it." 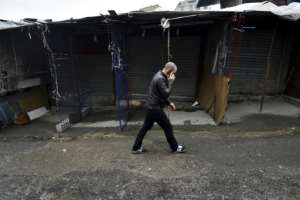 On Sunday, protesters marched on the district administrative office carrying bricks and bags of cement. Anti-riot police held them off for three hours before withdrawing in the face of the jubilant crowd.

"A free and democratic Algeria," protesters chanted as they walled off the entrance, which they painted with "No vote".

"There is no chance of even a sole voter placing a ballot here," said Boudjemaa Lakhdari, a 36-year-old vendor speaking amid the thronging protesters.

While Kabylie has historically had low election turnouts amid widespread opposition to the central government, Thursday's presidential vote is unpopular across the country too.

Mass protests, which forced ageing president Abdelaziz Bouteflika to resign his two-decade tenure in April, have taken place weekly across Algeria to demand sweeping reforms ahead of any vote.

The five approved candidates all either supported Bouteflika or participated in his government, including two as prime ministers.

During the three week long campaign, not one of the candidates visited Tizi-Ouzou or Bejaia, the other major city in Kabylie, where protesters wave Amazigh -- or Berber -- flags, despite a ban.

"We're here to reaffirm our rejection (of the vote) in a peaceful manner," said Massinissa Houfel, a 29-year-old lawyer. "We don't want to repeat the tragedies of the past.

He was referring to the bloody riots of the 2001 "Black Spring", when Kabylie had been preparing to celebrate the 21st anniversary of its fight to secure recognition of its Berber identity.

That April, the death of a high school student at a police station sparked riots and a crackdown in which more than 120 were killed and thousands wounded. 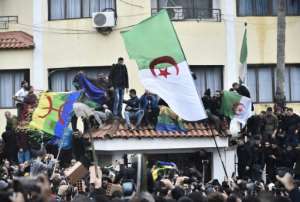 Algerian protesters have flown the Berber flag at demonstrations against presidential elections, despite a ban on symbols 'undermining national unity'. By RYAD KRAMDI (AFP)

Houfel said he was "shocked" by the candidacies of Ali Benflis, who was prime minister during the repression of 2001, and Abdelmadjid Tebboune, another premier under Bouteflika.

"There will be no vote, authorities must first release prisoners of conscience," Houfel said.

But in the face of the opposition, authorities remain determined to proceed with the vote, arresting hundreds of protesters, activists and journalists during the campaign, rights groups say.